How Avalokiteshvara Attained Her 1000 Arms 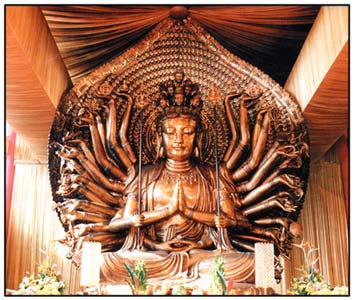 It is said the the personification of perfect Compassion, Avalokiteshvara (Guanyin) Bodhisattva (a great being who aspires to help all sentient beings be free of suffering before entering the bliss of Buddhahood), in the beginning of His/Her Bodhisattva career of helping sentient beings, vowed that "Should He ever become disheartened in saving sentient beings, may His body shatter into a thousand pieces." This might seem extreme, but it was symbolic of His overwhelming great Compassion and determination.

One day, while helping beings in a higher realm, He looked down into the hells which He had emptied through the teaching of the Dharma, and realised, to His dismay, that countless beings were still flooding into them. In a moment of exasperation, He became so disheartened that true to His vow, His body shattered in great agitation and despair. Despite this, He did not just give up — His consciousness beseeched the Buddhas for help. Of the Buddhas who came to aid Him, one was Amitabha Buddha, who became His Guru (personal teacher) Buddha. With the Buddha's miraculous powers, He attained a new form — one with a thousand helping hands of Compassion coupled with the eyes of Wisdom in each palm. With this, He renewed His vow to saving not just limited sentient beings, but all sentient beings.

This might seem like a Buddhist fairy tale or myth. So did it happen after all? Does it really matter? All tales, fictitious or not, can be skillful means to teach us the Dharma, as long as there are morals to them. It is a beautiful "legend" with powerful spiritual metaphors. When we begin our Bodhisattva path of helping some beings, we are bound to be disheartened, due to our unperfected Compassion and Wisdom. This is when the need of a good inspiring teacher or spiritual friend might come in. With the teacher's guidance, our vows are thereby renewed and strengthened. In walking the Bodhisattva path which inevitably leads us to come face to face with obstacles such as disappointment now and then, we either succumb to them and lose our Bodhicitta (the heart of wishing to help all beings, along with oneself, attain Enlightenment) or overcome them and become stronger — like Avalokiteshvara. Yes, there are only two choices when we face spiritual obstacles — to be forever weak and trapped by the obstacles we do not cross, or to cross them and become stronger with the experience. When we advance, we move towards Buddhahood. When we do not, we either backslide or come to a spiritual standstill. As we all suffer from spiritual burnout from time to time — let us then, be timely Bodhisattvas to each other — and always help each other recover in good time.