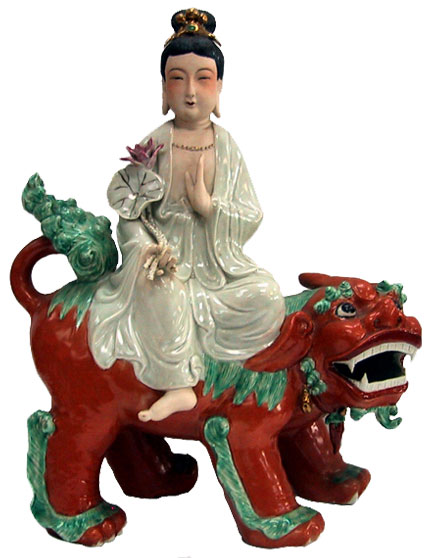 The Bodhisattva of Great Wisdom

He is the embodiment of great wisdom (Sanskrit language: prajna).

He appears to those who meditate on him. He instructs them in the Dharma and stimulates them to develop wisdom. The image of Manjushri Bodhisattva is often seen in meditation halls, libraries and scripture study rooms in monasteries.

His right hand holds a flaming sword, which represents the sharpness of prajna that can cut through the growth of suffering and the net of wrong views. The flame lights up the darkness, just as the light of wisdom dispels the darkness of ignorance.

His left hand holds a magnificent blue lotus flower in full bloom, on which rests the Prajnaparamita Sutra (Great Wisdom Sutra). This sutra contains the essence of the great wisdom teachings of the Buddha. The lotus is the promise of the future for all beings who follow the Teachings.

He is often depicted as riding a golden-maned lion, which symbolizes the stern majesty of prajna. The lion is the king of the beasts and is fearless. Similarly, Manjusri Bodhisattva teaches the dharma without fear or favour, like the lion's roar.

Sometimes, the golden-maned lion is replaced by a green lion which symbolises the wild mind which can only be transformed by meditation.

The Worship of Manjushri Bodhisattva in China

There is a famous place in China which is the centre for the worship of Manjushri Bodhisattva - the Wutai Mountain in the province of Shanxi in China.

As written in a sutra, the Buddha predicted that after He passed away in Final Nirvana, Manjushri Bodhisattva would reside on a mountain name Wuting in a country in the east called "Great China", where he would teach the dharma. Hence, Chinese people regard that mountain, now called Wutai Mountain, as a sacred place for worshipping Manjushri Bodhisattva. Many temples dedicated to Manjushri Bodhisattva have been built there.