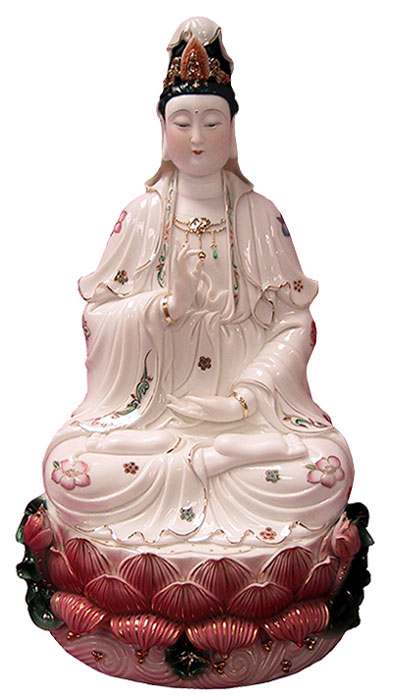 The Bodhisattva of Great Compassion

The Sanskrit name "Avalokiteshvara" means "the lord who looks upon the world with compassion".

Kuan: observe
Shih: the world / the region of sufferers
Yin: all the sounds of the world, in particular, the crying sounds of beings, verbal or mental, seeking help

Avalokiteshvara Bodhisattva is the embodiment of great compassion. He has vowed to free all sentient beings from suffering.

Avalokiteshvara Bodhisattva is has great powers and can help all sentient beings. His skilful means are limitless and he can appear in any form in all the six realms of existence to relieve the suffering of the sentient beings who live there. He vowed to rescue those who call on him when they are in suffering, for example, when caught in a fire, shipwrecked or facing an attack.

In the Lotus Sutra, Shakyamuni Buddha said that if a suffering being hears the name of Avalokiteshvara Bodhisattva and earnestly calls out to the bodhisattva, Avalokiteshvara will hear the call and relieve that being from his suffering.

According to the Huayen Sutra, Avalokiteshvara Bodhisattva transforms himself into forms that suit the nature of those to be helped. His manifestations or transformation bodies are countless.

e.g. if a boy or girl is about to gain some enlightenment, Avalokiteshvara Bodhisattva transforms himself into a boy or a girl to teach the child.

e.g. If a monk is about to attain some enlightenment, Avalokiteshvara Bodhisattva transforms himself into a monk.

In short, he can appear as a monk, a nun, or a normal person like you and me. The purpose of such transformations is to make people feel close to him and willing to listen to his words.

In China, Avalokiteshvara Bodhisattva is represented in female form and is known as Kuan Yin. Probably because of Kuan Yin's great compassion, a quality which is traditionally considered feminine, most of the bodhisattva's statues in China since the Tang Dynasty (A.D. 618 - 907) have appeared as female figures. In India, however, the bodhisattva is generally represented as a male figure.

In her hands, Kuan Yin may hold a willow branch, a vase with water or occasionally, a lotus flower.

The willow branch is used to heal people's illnesses or bring fulfillment to their requests.

The water ( the dew of compassion) has the quality of removing suffering, purifying the defilements of our body, speech and mind, and lengthening life.

Sometimes, he is represented with one head and 4 arms. This is the Four-Armed Avalokiteshvara, worshipped by all Tibetans as "Chenrezig", the Holder of the White Lotus. It is in the male form which has two hands in the praying gesture while the other two hands hold his symbols, the Crystal Rosary and the Lotus Flower.

There is a sacred place for the worship of Kuan Yin in China - the Putuo Mountain. It is actually an island located near the city of Ningpo, in Zhejiang Province. There are many stories of Kuan Yin's miraculous appearances at Putuo Mountain.