Amitabha: the Buddha of Boundless Light 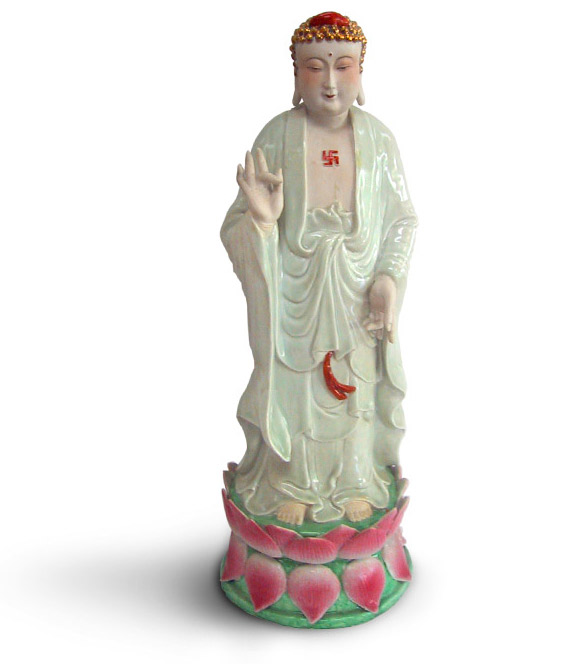 Amitabha: the Buddha of Boundless Light

According to Mahayana Buddhist sutras he was a king in the remote period of time. Renouncing his kingdom, he became a monk and was named Dharmakara, which means 'Treasury of Dharma'. Inspired by the teachings of the then Buddha of that time, Lokesvaraja Buddha, who taught him the way to supreme enlightenment many aeons ago, he made forty eight great vows for the saving of the sentient beings. The Eighteenth Vow, which is the basis of the Pure Land, ran like this: 'If upon the attainment of Buddhahood all sentient beings in the ten quarters who aspire in sincerity and faith to be reborn in my land, recite my name up to ten times and fail to be born there, then may I not attain the Perfect Enlightenment…'

Since then, the Bodhisattva Dharmakara, after five aeons of self-cultivation, finally attained the Supreme Enlightenment and became the Buddha Amitabha. This means that his grand and infinitely compassionate vow is now a reality, the paradise known as Pure Land or Sukhavati has been established, suffering beings must and will be delivered if only they will have the full faith to call upon his name.

Calling the Buddha's name with full faith is known to the Chinese as 'NIEN-FWO' meaning 'Prayer-recitation'. The Japanese term for this practice is known as 'Nembutsu'. In this practice three important qualities must be present in the mind: Sincerity, Faith and Aspiration to be reborn in the Pure Land. The simple prayer or formula that one needs to repeat is: