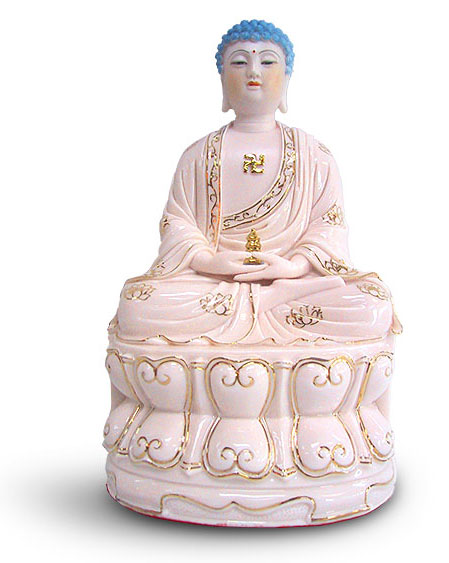 Yao Shih Fwo, one of the three foremost Buddhas of the Chinese Pantheon, is a Buddha of the past era. Better known to the people as the Buddha of Medicine or the Master of Healing, he is dear to the hearts of many, for they have indeed received his blessings in the forms of miraculous cures of all kinds of illness. The Buddha's efficacy in preventing calamities and granting prosperity besides curing illness has attracted a steady number of believers and devotees since the time of the Eastern Chin Dynasty (AD 317-420) to the present day. The Sutra of the Buddha of Medicine (Bhaisajyaraja Sutra) was also translated into Chinese at that period of time which provided a full account on the peerless Buddha, his Paradise and his Twelve Great Vows. However the later translation made by Tripitaka Master Hsuan Tsang, the famous monk of the Tang Dynasty, known as The Sutra of the Master of Healing (Bhaisajyaguru - Vaidurya - Prabhasa Tathagata), is the more popular Sutra which is widely read by most people today.

The title 'Master of Healing', is a literal translation of his Sanskrit name 'Bhaisajyaguru', the Buddha who favours worshippers with relief from the troubles of the world. Apart from curing illness, warding such calamities as famine, drought and plague, granting longevity and assisting the dead, Yao Shih Fwo is known to have dispensed all kinds of mundane benefits to those who pray to him. Despite his great popularity, temples dedicated to him are very scarce so that those who wish to worship him may do so at temples where his images can be found. He is often found in a triad with Sakyamuni Buddha and Amitabha Buddha, and his symbols are either the medicine bowl or the pagoda. When depicted alone, he holds his symbol with his left hand and he is normally attended to by his prominent disciples, the Great Bodhisattvas 'Radiance of the Sun' and the 'Radiance of the Moon'.