The south eastern corner of Sri Lanka is one of the driest, most desolate and remote regions in the country and much of it now forms the Yala National Park. It was in this unpromising place that one of the Buddhist world’s most famous and influential monastic communities once flourished. The Buddha called his teaching the Middle Way (Majjhima Patipada) meaning that it avoided the extremes of self mortification and self indulgence. However, some monks choose to practice austerities; and the Buddha allowed them to practice quite rigorous austerities on the understanding that these were not compulsory, and that they did not make a monk better than one who did not practice them.

The modern name Sithtulpavuva is derived from the ancient name Cittalapabbata, 'The Hill of the Quiet Mind'. Kakavanna Tissa, the king of Rohana in the 2nd century BCE, founded the first monastery here. Unlike the great monasteries in Anuradhapura and other towns life at Sithtulpavuva was hard and a monk or nun who lived there only if they were interested in silence and solitude. From a very early period Sithulpavuva earned the reputation of being the abode of saints. The commentaries are full of stories about the doings and sayings of Sithulpavuva’s monk ascetics.

Once a monk named Tissa being disappointed with the monastic life decided to disrobe and went to tell his teacher of his decision. The old teacher was wise and skillful and knew that if his pupil were only to stay a little longer and try a little harder he might become enlightened. So without trying to convince him to stay he said to him, ‘I am old so please make me a new hut before you leave and don’t forget to do it mindfully’. The student did as he was asked and then went to report to his teacher who said, ‘You must be tired after all that work. Lie down mindfully and rest for a while before you go. The student did this and in the afternoon went to say goodbye to his teacher. But the old teacher said to him, ‘It’s a bit late to leave now. Why don’t you sleep in the hut tonight'. The student agreed to this and went to the hut to prepare his bedding which he did mindfully and in the morning he was enlightened. We are told that at one time there were 12,000 monks at Sithulphavuva. This is obviously an exaggeration but as there are more than 160 caves in the area some of them quite large, very big place certinally existed.

The first thing the pilgrim will see on arriving is a long high hummock with a stupa on its top. Ancient stairs lead from both ends of the hummock up to the stupa. On both sides of the stairs on the southern end are several inscriptions, the earliest dating from the 1st century CE two of them by King Gajabahuka Gamini and King Karillha. On the north end are a series of terraces with the ruins of monastic buildings on them. On the top is a stupa called the Maha Sithulpahavuva Stupa dating from the 3rd century but renovated in the 1950’s. On the east side of the hummock is the largest of Sithulphavuva’s numerous caves. This was probably the monastery’s chapter house or main temple. A few fragments of paintings can still be seen on the roof of the cave. In front of the cave is a small modern pavilion housing a statue of Avalokitesvara, one of the most outstanding works of art from ancient Sri Lanka. Despite missing its arms and being very symmetrically conceived this sculpture still conveys tremendous warmth, grace and dignity. The image dates from the 4th century and shows that these were at least some Mahayanists here at that time.

Before Buddha images came into vogue in the 3rd century, large rectangular stones called thrones (asana) were used as a focal point of devotion. 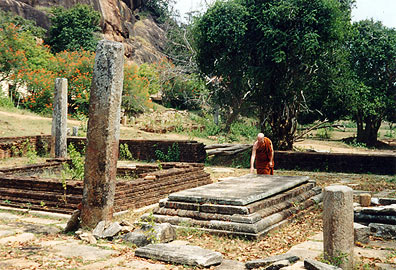 The Ancient Asana at Sithulphavuva

These were worshipped as aniconic symbols of the Enlightened One and flowers were laid on them. Some of these thrones can still be seen at the more ancient monastic sites usually neglected and unused. In the Visuddhimagga there is a story about a throne at Sithulphavuva. Just to the south of the cave is a throne. As each monastery had only one throne this is almost certinally the one mentioned in the Visuddhimagga.

How To Get There
Sithulphavuva is about 20 km from Kataragama.