The prominent rock at Yapahuwa and its accompanying ruins are of interest because of the brief part they played in the long drama of the sacred Tooth Relic. After the death of King Prakramabahu II, Sri Lanka fell into chaos again with various factions vying with each other for power. In 1272 Bhauvanekabahu I became king and moved his capital from Polonnaruwa to Yapahuwa taking the Tooth Relic with him. Yapahuwa had been the stronghold of a general called Subha and Bhauvanekabahu set about strengthening it and making it suitable as a royal residence. But the king had been reduced to little more than a regional lord and by any standard Yapahuwa is a very modest place. However he was in possession of the Tooth and for as long as he had it the people would look to him as their ruler.

The Tooth Relic's brief period of respite in Yapahuwa came to an end soon after Bhauvanekabahu’s death in 1284. The Pandyas of south India invaded the island yet again and this time actually succeeded in capturing the sacred relic. News of this catastrophe threw the Sinhalese into despair and quickly spread throughout the Buddhist world. As soon as the emperor of China, Kublai Khan, heard of this he sent an envoy to India with an offer to exchange the Tooth for a fabulous treasure. Before they could arrive though Parakramabahu III became king and aware that his legitimacy to rule would be in doubt as long as he was not in possession of the precious relic he actually went in person to the Pandyan court, hat in hand, to negotiate for its return. Exactly what concessions or payment the Pandyans demanded for the Tooth we do not know but Parakramabahu returned to Sri Lanka with it to widespread relief and rejoicing. It was enshrined in a specially built temple in the new capital at Kurunegala. 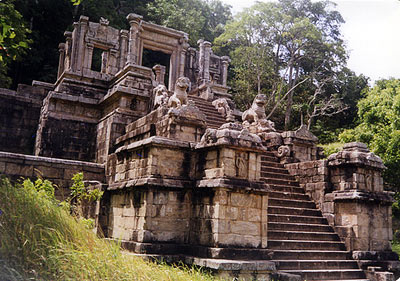 The great stairway leading to the summit of Yapahuwa

The walls of Yapahuwa form a rough semicircle the ends of which join the foot of the high steep-sided rock. The outer fortification consist of an earthen rampart about 20 feet high and half a mile long on which a brick wall once stood. A moat with three causeways across it to the three gates ran around this rampart. The inner fortification consists of a stone wall averaging 12 feet in height and about 500 yards long with a moat outside it and with two gates. The homes of the ordinary people would have been between the outer and inner walls while king’s palace, administrative buildings and of course the Temple of the Tooth were within the inner wall.

Crossing the moat and entering the south gate of the inner wall the pilgrim will see the various buildings of the modern monastery and a little beyond them the great stairway. This magnificent structure climbs the lower southern slopes of the rock to a natural terrace where the Temple of the Tooth once stood. The stairway originally comprised of three flights of stone stairs, one above the other, however the lower one has disappeared and been replaced by cement ones. As you climb you will notice that the walls on either side of the stairs form pavilions in each of which is a graceful female figure. Above these are two wide-eyed lions crouched and ready to spring and the balustrades above these lions take the form of elephants with their trunks extended. Finally at the top of the stairway the pilgrim will reach the impressive and harmoniously conceived doorway that once led into the Temple of the Tooth. Passing through the door the pilgrim will see directly in front of him or her the foundations of the temple. The rough path to the top of the rock is to the left. It is a steep climb but well worth the effort. The caves on the top show that Yapahuwa was inhabited by ascetic monks for centuries before it became the capital.

Having seen the great stairway go to the monastery and ask for the key to the new museum which contains a modest collection of antiquities found in and around Yapahuwa. Amongst the more interesting of these is a hoard of Chinese coins and a Sung period glazed cup showing that Bhuvanaikabahu must have had diplomatic and trade contact with China.

How To Get There
Yapahuwa is of the main Kurunegala-Anuradhapura road and is 46 km north of Kurunagala.