All the bodhisattvas of the Mahayana tradition were associated with certain mountain peaks – Maitreya with Kukutapadagiri, Manjushri with Wu Tai Shan, Avalokitesvara with Mount Potala and Samanthabadra with Sri Pada. Consequently pilgrims from India and even further afield used to come to Sri Lanka to worship both Samanthabadara and the miraculous footprint he watched over. For foreign pilgrims determined to make the trip one of several roads to Sri Pada went inland from Weligama to Ratnapura and from there to the holy mountain. On the return journey pilgrims would usually take a boat or raft down the Kalu River to the coast at Kalutara. Ships plying the west coast of Sri Lanka between Mantota and Galle would anchor briefly in the shallow bay at Weligama, then known as Mahavalukagama, to let pilgrims off. As these pilgrims commenced their journey they passed a large rock at with an image of Samanthabadra on it, the bodhisattva’s calm reassuring countenance giving them courage for the arduous journey ahead. Local legend says that the image is of Kustharaja, the Leper King, supposedly a monarch of a far off land who came to Sri Lanka seeking a cure for his skin disease. After a diet of coconut milk he was restored to health. 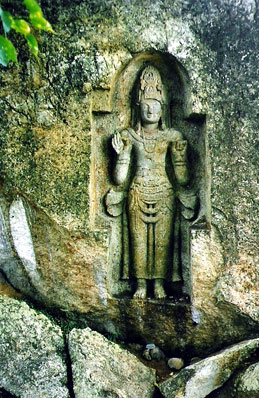 A statue of the Bodhisattva Samanthabadra

The place now called Kustarajagala is a cluster of large moss-covered boulders shaded by several majestic old trees. On the face of one of these boulders is an image of Samanthabadra carved in low relief in an arched niche with two recesses on its sides to allow for the flourish from the bodhisattva’s dhoti. The bodhisattva is standing, with both his hands in the gesture of debate and his dhoti and belt, bracelets, the jewelry around his neck and his crown are all richly carved. It will be noticed that there is not one image of the Buddha in the crown but two and another two on the sides of the crown. These represent the four Dhyani Buddhas and show conclusively that this image is of Samanthabadra and not Avalokitesvara as most guide books contend. The bodhisattva’s eyes are open and he has a rather blank expression. The image is located at least eight feet from the ground so as to be able to look down on worshippers. The statue dates from either the 8th or 9th century.

How To Get There
Weligama is on the main coast road and railway line from Colombo, 28 km from Galle and 15 km from Matara. From the center of town take the main road west. It is a pleasant 15 minute walk.