In the Culavamsa there is a verse probably referring to the King Aggabodhika who ruled during the 7th century and which says, ‘In Kanagama (the Village of the Blind) he built a hospital named ‘The Image’. There the wise king set up a stone statue of the Buddha which he had made and which was called ‘The Great’, because it was produced as if by a miracle”. It seems very likely that this is referring to Maligavela and its temple, hospital and statue. It is quite possible that this is a reference to Maligavila’s statue.

Walking from the bus stop through the jungle the pilgrim will soon come to a ruined temple with a huge Buddha image in it. Against the back wall of the temple is the image. It is easy to understand how such a huge and finely sculptured image could earn the name ‘The Great’. The image was discovered in 1951 laying in the jungle with its head broken off and in 1974 efforts were made to raise it but these failed. Eventually in the 1980’s the image was raised and restored and some of the ruins around it were excavated. The image is carved out of a single block of stone weighing about 100 tons and stands 14.5 meters high. About half a kilometre away is a beautiful image of Avalokitesvara. The image is located at the top of five terraces and is calved out of a single piece of stone weighing about 60 tons and stands 9.85 meters tall. When first found it had laid on its face which had preserved the details of the face and it was broken into several pieces. Sometimes after its discovery local people thinking that the image might contain treasure blew the image up with dynamite breaking it into over a hundred fragments. The image was finally restored in 1990 and like the nearby Buddha image the restorers have done an wonderful job. 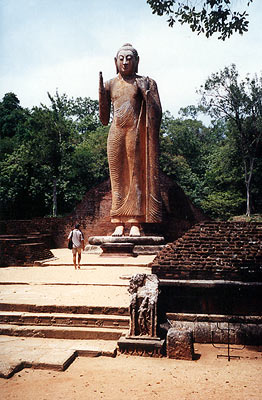 The giant Buddha image at Maligavila

How To Get There
Buses from Wellawaya, Butala and Monaragala go to Maligivilla via Okkampitiya.