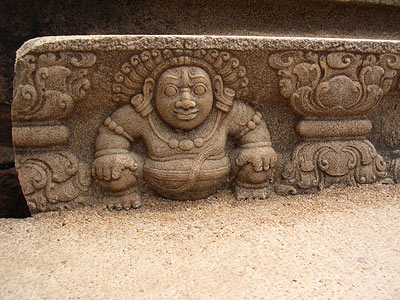 A stone carving from Hatthikucchi

Although Srisanghabodhi only ruled for three years, from 251 to 253 his name is still known by all Singhalese, even those who take little interest in their country's past. He won no glory in battle, he brought no distinction to the country by his statesmanship and he built no great public works or monuments and yet he is still considered to be the country's greatest king. After the untimely death by poisoning of King Sanghatissa the pious Srisanghabodhi was elevated to the throne over his stronger and more ambitious brother Gothabhaya who was given the post of treasurer. Many in the government shook their heads at Srisanghabodhi’s appointment thinking that such a gentle and honest person could never make an effective ruler. Gothabhaya wanted to make a bid for the throne but his supporters bid him be patient, telling him that his chance would come when his brother started to make a mess of things and started to become unpopular. Srisanghabodhi insisted on keeping the five Precepts just as he had done so previously. Believing that capital punishment had a deterrent effect but knowing that killing was wrong, he had the bodies of people who had died of natural causes beheaded at the execution ground while condemned criminals were imprisoned or exiled. He is said to have dispelled a terrible plague which was ravishing the country by offering his own flesh to the demon that was causing it. When it became clear that the king’s righteousness was not going to cause the administration to collapse Gothabhaya decided he could wait no longer and he staged a coup.

The rebels approached the capital but Srisanghabodhi was not prepared to defend his throne at the cost of human life and he disappeared into the forest, only too happy to be freed from the burden of governance. Gothabhaya could not believe his luck. He made himself king and quickly consolidated his position by executing all his brother’s ministers and supporters and putting his own men in their place. But being scheming and ambitious himself he couldn’t conceive that his brother was not like that also. Soon he began to fear that Srisanghabodhi might plot his return at some time in the future. Very clearly he would never be safe until the former king was dead and so he offered a reward for his head. Meanwhile Srisanghabodhi found himself a beautiful hermitage and settled down to doing what he enjoyed most: meditating , reading and befriending the forest creatures. He eventually heard about the reward on his head but he was not overly concerned about this as about the only people he had contact with were simple woodsmen and honey gatherers. But one day a poor peasant happened to see the former king and immediately recognized him. Although feeling sorry for his former liege the peasant knew that the reward would make him and his family’s hard life many times easier. Sanghabodhi knew exactly what the man was thinking and understood why he was tempted by the reward.

His bodhisattva-like heart knew exactly what he had to do. So that the poor man would not have to commit murder he took out his sword, cut off his own head and handed it to the horrified man. Gothabhaya was horrified too not by the manner of his brother’s death but because it made him look even worse in the eyes of the people. In the end though Srisanghabodhi’s sacrifice seems to have had a transforming effect on Gothabhaya after such an unpromising start, as Gothabhaya turned out to be a relatively good king. The name Hatthikucchi means the elephant’s belly although why Srisanghabodhi’s hermitage was given this strange name is not known. Buddhaghosa mentions Hatthikucchi as one of the most famous monasteries in Sri Lanka along with Mihintale, Situlpava and Dakkhinagiri. Given this fame it is strange that the place is so rarely mentioned in the records.

The ruins of Hatthikucchi are very picturesque and are set amongst numerous strangely shaped rocks. If the pilgrim goes behind the huge central rock he or she can climb up to where there is a wonderful view of Hatthikucchi’s ruins and the forests and hills beyond it. Up here is also the famous Cave of the Overhanging Rock. According to Buddhaghosa this cave is one of the best meditation caves in Sri Lanka. There is also a small museum near the entrance of Hatthikucchi displaying some of the objects found at the site. If you walk into the forests around Hatthikucchi you will find more ruins and numerous caves used by monks in ancient times. But the pilgrim is urged to be careful as there are elephants in the area, especially during the dry season when they come to drink from the nearby lake.

How To Get there
Hatthikucchi is just off the main Kurunagala – Anuradhapura road, some 26 km north of Galgamuva