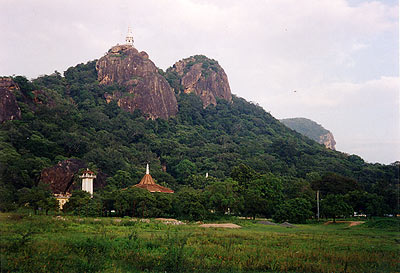 Dimbuagala from the foot of the mountain

Dimbuagala is a huge rocky ridge rising 1700 f above the surrounding countryside. Its ancient name was Udumbaragiri. The earliest caves date from the early centuries of Buddhism but it was during the time of Prabakramabahu I that the place came into its own. In 1153 after years of fighting for the throne Prabakramabahu rode into Polonnarua and proclaimed himself king. Much of the country was in ruins but at least it was now united under one strong ruler. The new king immediately launched an ambitious program to be rebuild the administration, the economy and to strengthen the still fragile unity. During the years of fighting the Sangha had become shamefully corrupt. One group of monks however had kept the faith through all the hardships and had kept the flame of the Dhamma alive, the monks of Dimbuagala. As a part of his program to rebuild his country and strengthen its still fragile unity Parakramabahu decided to first purify and then to unite the Sangha. Prakramabahu had a lot of experience in diplomacy and warfare but none at all in religion and so he was not sure how he should set about this task. It was only natural therefore that he should turn to the most respected monk in the country, the austere and sagacious Maha Kassapa, abbot of Dimbuagala,. This monk and his disciples had looked on in impotent despair as Buddhism declined but now their chance had come. Maha Kassapa was called before the king and asked to advise him what had to be done to Kassapa knew that his time had come. A great convocation was held and after being carefully examined thousands of monks were defrocked, some were returned to being novices while others were warned to mend their ways. After this purification, many new monks were ordained and a new course of study for monasteries was drawn up. Maha Kassapa also drew up a code of conduct (kathikavata) for monks to supplement the traditional Vinaya and then this code was then carved in stone at the Gal Vihara at Polonnaruva for all to see. This code shows that Kassapa demanded high standards from his monks and that solitude, simplicity and asceticism were to be the ideals.

Dimbuagala is a huge rocky ridge rising 1700 f above the surrounding countryside. Its ancient name was Udumbaragiri. The earliest caves date from the early centuries of Buddhism but it was during the time of Prabakramabahu I that the place came into its own. Queen Sundara Mahadevi gives her linage and then says Seeing the hardship of people who, like the old, hand on to chains and tread the path between the Great Moon and the Great Sun Caves where 500 of the Great Community of monks reside, and where the relics of the Buddha are enshrined, caused the rock to be cut and the paths improved. . She had statues and stupas and Bodhi trees established and given to the Kalinga cave. And on Poson of the twenty seventh year of the reign of Jayabahu she caused to be constructed sacred vessels fro the purpose of offering gruel and boiled rice gave them to the monastery.’ The first cave with its plaster walls and when bell came here at the end of the 19th century the faded outlines of paintings were still visible. One then passes a rock pool with remarkably clear water in it and then a very narrow ledge that leads to the second cave then passing through two natural tunnels one comes to a third cave. A fine view from this cave. The remains of walls can be seen. In a raised rectangular panel on the roof of this cave is an inscription dated the 27 year of Vijayabahu I 1065-1120.the Mahavamsa says; ‘when the king heard that the people of the island were suffering because of a drought with his heart trembling with pity lay down on the ground in the courtyard of the great stupa and resolved thus; unless I be raises up by the water that the gods shall rain down I will not rise from this place even if I die here. As the ruler of the earth lay there the gods poured forth the rain over the whole island of Lanka. And revived the wide earth….thus by his compassion did he avert the fear of famine in the island’. The purification took place in about 1165, in the twelfth year rule.