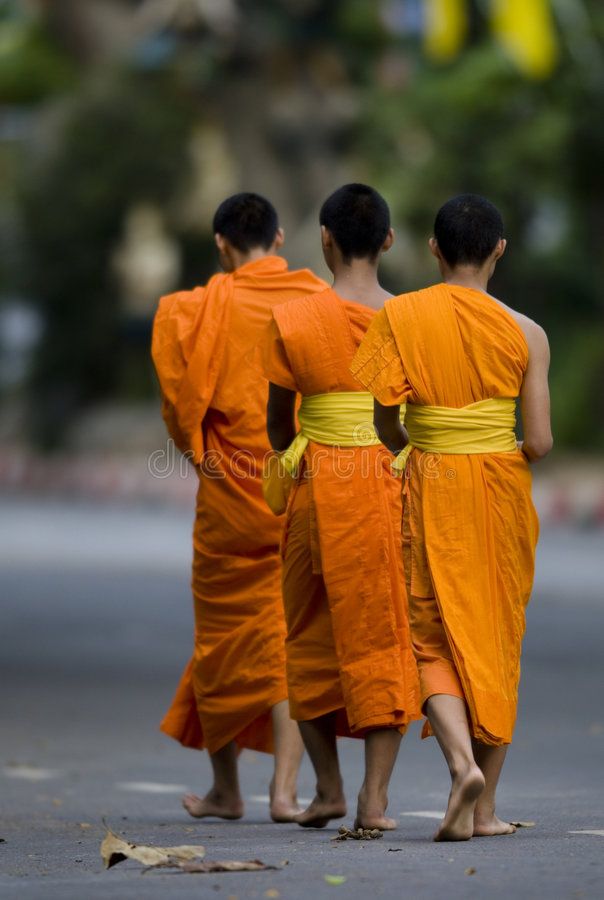 A few months after his enlightenment the Buddha founded an order or Sangha of monks. The purpose of this order was twofold. Its primary purpose was to provide a community that would give the optimum opportunity for its members to practice the Dhamma and attain Nirvana. Its secondary purpose was to transmit the Dhamma and be a witness to its transforming power.

To become a novice (samanera) all that is needed is to approach a monk of at least 10 years standing and ask to be accepted. After undertaking several years training and being at least 20 years old the novice is qualified to be a fully ordained monk. To do this he must approach an assembly of 10 monks each of at least 10 years standing who are respected for their virtue and learning. The candidate is then asked 11 questions to determine his suitability. (1) Are you free from disease? (2) Are you a human? (3) Are you a male? (4) Are you a free man? (5) Are you free from debt? (6) Do you have any obligations to the King? (7) Do you have your parents permission? (8) Are you at least 20 years of age (9) Do you have your robe and towel? (10) What is your name? (11) What is your teachers name? If the candidate answers these questions satisfactorily and if no objections are raised by the assembly, he is considered to be a fully ordained monk, (bhikku) A monk can use property belonging jointly to the sangha but he himself is supposed to own only eight things - three robes, an alms bowl, a razor, needle and thread, belt, and a strainer to purify drinking water. He is also obliged to abide by the 227 rules contained in the Vinaya Pitaka.

Since the time of the Buddha monks have expanded their role beyond that of the practitioner and teacher to become, at different times and places, educators, artists, social workers, scholars, physicians, and even rulers. In Tibet, a line of monks called the Dalai Lama's, ruled the country from the 16th to the middle of the 19th century. However despite these expanded, sometimes even incongruous roles, there have always been monks who have lived simple lives, meditating, teaching and gently influencing the communities around them.