The sizes, positions and gestures of statuary at any given temple depend on a number of factors. Affluence, historical period and sect all play a role in choosing a statue. The most common Buddhas to be found are: 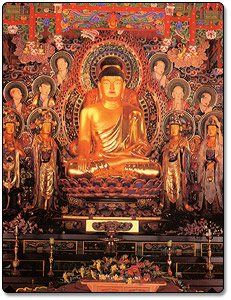 1. Sakyamuni, the historical Buddha usually depicted with a bare shoulder and hands in his lap or one touching the floor.

3. Amitabha, the Buddha of light and of the Western Paradise - usually golden.

4. Maitreya, the Future Buddha, usually in a posture of reflection: the Laughing Buddha of the Chinese. 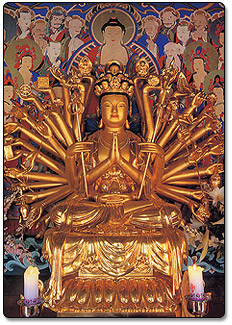 Most Bodhisattva statues are of various forms,

Sitting next to Amitabha:

1. Avalokitesvara, the Bodhisattva of Compassion.

2. Mahasthramprapta, the Bodhisattva of Power, usually carries a lotus.

Sitting next to Sakyamuni:

1. Samantabhadra, the Bodhisattva of Practice, usually carries a lotus.

2. Manjusri, the Bodhisattva of Wisdom, usually rides a lion when alone.

Two Bodhisattvas, who are often housed separately, are Avalokitesvara and Ksitigarbha. A special and very popular form of Avalokitesvara, the Bodhisattva of Compassion, is the one with a thousand hands. Each hand has an eye so that it can see how to help all beings. Another important Bodhisattva is Ksitigarbha. He usually has green hair and waits to help all tormented people. Beside Ksitigarbha, placed along the walls of the shrine, there are the colourfully dressed judges of the Hells.

According to mythology, these judges wait to determine your fate after death. Sometimes there is a shrine for the enlightened disciples of the Buddha. These look like small Buddhas and are often white.