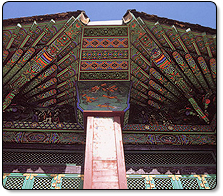 Stonework is abundant in Korean Temples. Some of the most evident objects are stupas and pagoda.

Stupas were Buddhism's very first works of art, and in India you can still see some dating from two hundred years before our era. They were mainly built over the remains of Buddhist saints. In China, they were modified into the multi-storied forms that we call pagodas, but they were still monuments to great personalities. Once introduced to Korea, they were changed again, making them typically Korean.

Other stone works often complement temple compounds. Granite lanterns are a special Korean artistic addition to any temple. Traditionally they lit the way for the monks going to the 3:30 a.m. chanting. There are also water cisterns at springs and the steep stone stairs, which take the visitor up into the inspiring world of the Buddhas in the Main Hall. 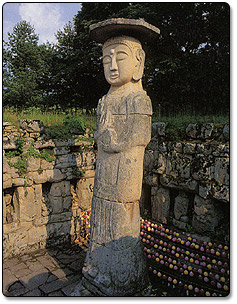 Some temples and hermitages, such as the late Venerable Ch'ong-dam's (1902-1971) grave at Toson-sa Temple in northern Seoul, have the equivalent of outdoor exhibitions of exquisite stone masonry.

Wood is specially valued by Korean Buddhists, as evidenced by wooden temple buildings, with their wooden floors, their superb, wooden rafters, and wooden doors. Not only are the rafters beautifully finished with cocks' heads, but also the doors are covered in delightful details. Look at them closely. There are little bugs crawling over flower petals and butterflies fluttering across mountains.

Wood is not only enjoyed aesthetically but it is also appreciated for its sound and feel. The ubiquitous mokt'ak (a wooden percussion instrument) accompanies all ceremonies and can be heard breaking through the early morning to awaken the temple community. Monks and lay people carry around wooden prayer beads, used to help concentration. And there are also statues made of wood, sometimes gilded and sometimes not. Wooden sutra cases and boxes for the giant paintings displayed on festival days are also made of wood.

As soon as you enter a temple building you will see many different statue. Let us now take a look at the most important ones but first the Story of the Mokt'ak.

The Story of the Mokt'ak 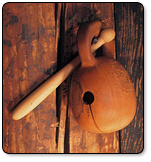 Once there was a naughty monk. After some time he died and was reborn as a fish. Out of his back grew a tree that caused him much pain.

One day his teacher saw him. The disciple begged that the teacher to break off the tree and carve a fish shaped instrument from it.

The teacher did so and the instrument, the rnokt'ak, inspired the people whenever it was played in the temple.