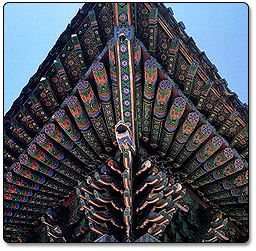 In Korean, temples and palaces are painted in a particular style called "tanch'ong". Tanch'ong means "red and blue", the principal colours used in these colourful cosmic designs. Originally arriving with Buddhism when it was brought from China, the patterns of tanch'ong were modified in Korea. Tanch'ong preserves the wood from insects and the elements and adds glory and richness to the buildings.

The outside eaves, the inside rafters and the ceilings are covered with intricate tanch'ong patterns. On the main temple beams and among the rafters, interwoven between the patterns, you will find pictures of spirits, ancient monks, Bodhisattvas and dragons, to name a few. It is said that during the Shilla period, tanch'ong was even found on commoners' home. Now it is limited to temples and palaces as well as some musical instruments.

Buddhist paintings are not only beautiful but also full of meaning. Symbols are included in the paintings; beauty and meaning are interrelated to instruct the visitor on his spiritual quest, reminding him of the path. 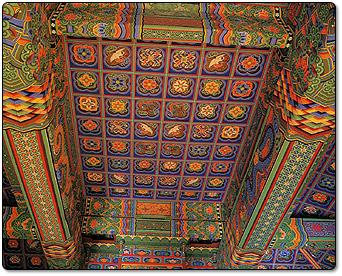 On the outside ends of big buildings, up towards the roof, you will see three circles. These represent heaven, earth and man, the three important things that Tangun, the mythological founder of Korea, is supposed to have brought with him. They have come to represent the Buddha, his teaching and the community of Buddhists.

Lotuses, are another common symbol found in Buddhist paintings, are to be seen in many forms. The lotus grows from mud (representing ignorance) up to the clear sunlight (representing enlightenment).

The symbol of the fish is often painted on the main Buddha table. It represents the effort and determination necessary for attaining enlightenment, for the fish supposedly, never closes its eyes.

If you look closely, you will find swastika everywhere: on the outside of buildings, woven into patterns, even in the decorations in the subways and in roadside railings. The swastika is an ancient Buddhist symbol of peace, harmony and good luck.