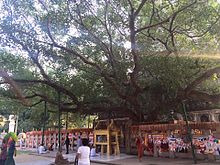 The name given to the tree at Bodh Gaya under which the Buddha sat on the night he attained enlightenment. The tree itself was a type of fig with the botanical name Ficus religiosa. In the centuries after the Buddha, the Bodhi tree became a symbol of the Buddha's presence and an object of worship. King Asoka's daughter, the nun Sanghamitta, took a cutting of the tree to Sri Lanka where it still grows in the island's ancient capital of Anaradapura.

The original at Bodh Gaya was destroyed by King Puspyamitra during his persecution of Buddhism in the 2nd century BC and the tree planted to replace it, probably an offspring, was destroyed by King Sassanka at the beginning of the 7th century AD. The tree that grows at Bodh Gaya today was planted in 1881 by a British archaeologist after the previous one had died of old age a few years before. Many temples throughout the Buddhist world have Bodhi trees growing in them which are or are believed to be offspring of the one from Anaradapura and their worship forms an important part of popular Buddhist piety.