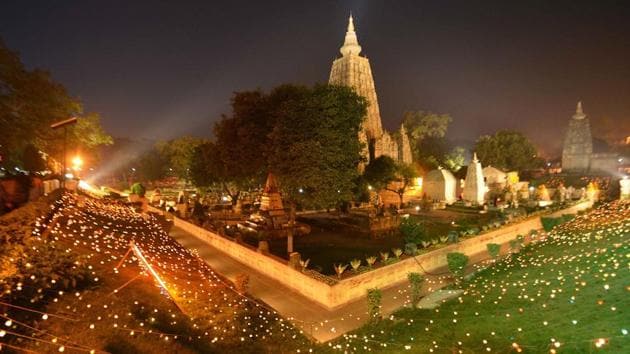 This small town, the site of the Buddha's enlightenment, is in the northern Indian state of Bihar. At the Buddha's time the town was named Uruvela, but subsequently came to be known as either Sambodhi, Bodhimanda or more usually as Mahabodhi. The name Bodh Gaya is of recent origin, dating from about the 18th century. King Asoka is credited with building the first temple at Bodh Gaya in the 2nd century BC. In either the 4th or 5th century the present Mahabodhi temple was built replace it. The site of a great monastic university, Bodh Gaya was the premier centre for the study of the early Buddhist schools in India for 700 years. Its most famous and enduring institution was the huge monastery built by the King of Sri Lanka in the 4th century which continued to function right up to the 13th century. Bodh Gaya became very early and remains even today the most important place of Buddhist pilgrimage. When it was abandoned in the 14th century its temples, shrines and monasteries fell into ruin and only began to be revived from the beginning of this century. Today most Buddhist countries have temples there and the place is visited by thousands of pilgrims and tourists every year.