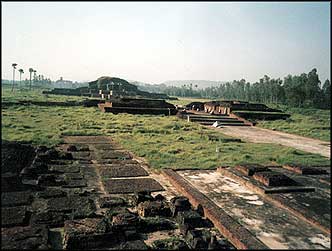 This place has no known association with the Buddha but is included here because of its relative closeness to Champanagar and its importance in the later history of Buddhism. This great monastic university was founded in the 8th century and became the intellectual centre for Tantric Buddhism. One Tibetan source gives us this description of the monastery. "Sri Vikramasila was built on the bank of the Ganges in the north of Magadha on the top of a hill. At its centre was built a temple housing a life-size copy of the Mahabodhi image. Around this were fifty three small temples for the study of the Guhyasamaja Tantra and another fifty four ordinary ones, all being surrounded by a wall. Thus the number of temples was one hundred and eight". The perimeter wall apparently had six gates and at the entrance to the main temple were two statues, one of Nagarjuna and another of Atisa. In another account we read that as a delegation from Tibet approached the great monastery they were "greatly thrilled to have the first distant glimpse of its golden spire shining in the sun" Some of the monasteries 'gate keeper scholars' were amongst the greatest names of this twilight period of Indian Buddhism. They included Santipa, Jetari, Ratnavajra, Jnanasrimitra, Naropa and Atisa. 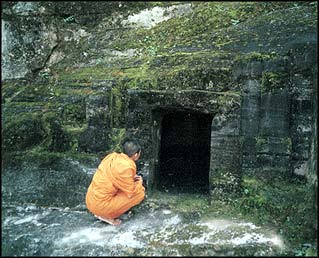 During the time of King Ramapala at the beginning of the 11th century there is said to have been 160 teachers and 1000 students in the monastery. You must go to Vikramasila via Patharaghat, a picturesque hill where there are rock cut caves, numerous Buddhist statues and a fine view over the Ganges. From there the road goes another 3 kilometres to the main ruins, the dimensions of which are truly impressive. A broad processional way leads up to the monastery's main entrance. The remains of the huge stone pillars that once supported the roof of the gatehouse can be seen on the left and right. Passing through the gate you enter a vast quadrangle surrounded by monks cells. The thickness of the walls suggest than there may have been in two or even three tires of cells. In the middle of the quadrangle is the immense main temple, built on a cross plan, rising in three terraces and with shrines on each of its four sides. Terracotta figures once decorated the sides of the terraces but only a few of Mapthese now remain. Unfortunately all the statues found on the site are locked up in a large building and can't be seen. Three cheers to the Archaeological Survey which says it is trying to attract visitors to Vikramasila! To get there you will have to hire a vehicle in Bhagalpur and go via Kahalgong and Patharaghat, a distance of about 50 kilometres over bumpy dusty roads.