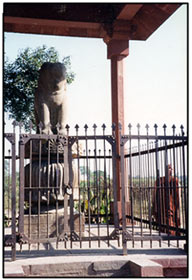 Asoka Pillar - capitalAccording to legend the Buddha went up to the Tusita Heaven, spent three months there teaching the Abhidhamma to his mother and then descended back to earth at the village of Sankassya. The story was very popular in ancient times and is often depicted in Buddhist art. However, neither this legend or even Sankassa itself are mentioned in the Tipikaka. Nonetheless from a very early period the place apparently had a special significance for Buddhists. This is suggested by the fact that King Asoka erected one of his pillars here. It is unlikely that the legend about the Buddha's visit to the Tusita Heaven had developed at such an early time.

When Hiuen Tsiang came to Sankassa he saw Asoka's pillar but today only the capital remains. It sits in a larMapge pavilion surrounded by an iron fence. Consisting of an elephant with its head now missing, it is a clumsy piece of work lacking the realism and vigour of Asoka's other capitals. Nearby is a large mound with a Hindu temple on it, obviously the remains of a stupa. Sankassya is a long way from anywhere, difficult to get to and having no associations with the historical Buddha and little to see, is hardly worth the effort involved in getting there. There are two temples that are happy to offer accommodation if you need it.