Polonnaruwa
Throughout the 10th century Sri Lankan politics was marked by continual power struggles, regional revolts and civil wars. The south Indians took advantage of this instability to launch a series of invasions. In 954 Sena IV became king and took the decision to move the capital to Polonnaruwa, a large regional city which was much further east and thus much safer from invasions. Two of Sri Lanka’s greatest kings, Vijayabahu I and Parakramabahu I ruled from Polonnaruwa; the first for forty years and the second for thirty-two years. Both monarchs were great builders and these two men built most of the monuments the pilgrim sees in the city today. Another great builder was the Nissankamalla who also repaired or enlarged several temples and stupas built earlier. The ruins of Polonnaruwa are spread over a wide area in a north – south formation. We will start with those in the south and move north.

The Royal Palace
This huge structure is probably the royal palace Vijayabahu I built for himself. The eastern entrance leads to a pillared hall, which in turn leads to the huge central edifice made of brick. To the left of this is a flight of granite stairs, which led to the upper stories of which the Culavamsa says there were seven. Around the hall and central edifice is a gallery containing 40 small chambers or rooms. These must be some of the one thousand rooms mentioned in the Culavamsa. One wonders what they were all used for.

Audience Hall
To the east of the palace is a high pillared hall. At the landing slab at the head of the stairs leading up to this hall is an inscription which reads ‘hall of public audience’. This is where the king would occasionally address his subjects or listen to their complaints. The hall consists of a three tiered platform with an impressive staircase in three parts on its north end. On the sides of the bottom platform are figures of elephants, on the second lions and on the third dwarfs. There are four rows of pillars, 12 in each row. All are decorated with floral designs. If the pilgrim now leaves the royal compound and takes the road north he or she will soon come to the sacred compound containing some buildings of particular interest and beauty.

Vatadage
Despite claiming to have done so, the Vatadage was not built by Nissankamalla but only repaired and embellished by him. It follows the pattern of other stupa houses of the original two inner circles of pillars none have survived. 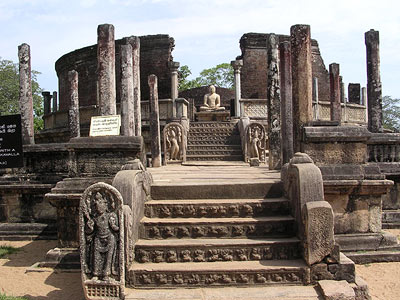 The entrance stairs at the four cardinal points are profusely ornamented. Of the original three circles of pillars supporting the roof only the outer one remains. Between each of these pillars are stone screens tastefully decorated with four-petalled flowers. The carvings on the Vatadage’s moonstones and other features are particularly fine. This is to my mind the most beautiful temple built during the Polonnaruwa period. 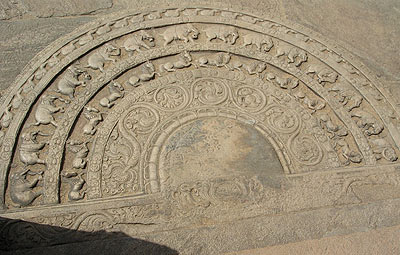 The Stone Book
On the eastern side of the Hatadage is a huge slab of rock in imitation of a palm leaf book and with an inscription by King Nissankamalla on its upper surface. The stone is 26 feet 10 inches long, 4 feet 7 inches wide and 2 feet 2 inches thick. Carved on each end is a line of geese below which is figure of the Hindu goddess Laksmi with two elephants tipping pots of water over her. The postscript on the southern end says that this stone was dragged from Mihintale, some 80 miles away, by team of men under the command of Totadanavu Mandnavan. The inscription was written towards the end of Nissankamalla’s reign but is just as boastful as his numerous earlier ones.

Nissankalata Mandapa
According to the Culavamsa this lovely little pavilion was built by Nissankamalla so he could sit within it and either listen to pirit or on special occasion’s worship the Tooth Relic. A stone railing, plain except for the cone shaped tops of the posts, encloses an area 34 feet by 28 feet which is entered by a gate on the side. Inside is a stone platform with a small stupa at its centre and with eight pillars carved in imitation of lotus stalks rising from it which supported the roof. At the top of each pillar is a separate octagonal capital in the shape of a lotus blossom. The king and the members of his court would probably sit on the ground around the platform listening to the chanting of the assembled monks who sat on the platform.

Alahana Parivena
Proceeding north along the road the pilgrim will arrive at a large collection of buildings clustered around a stupa. This is the Alahana Parivena, a monastery built by Parakramabahu. The most prominent structure in this complex is the Kiri Vehera. Directly south of the Kiri Vehera is the Lankatilaka, the monastery's main image house. This huge building is nearly 50 feet high and originally had a vaulted brick roof. The entrance is made of massive fluted pylons covered with plaster in which must have originally been two huge wooden doors. Walk around the walls and look at some of the fine stucco work. The walls of the Lankatilaka were once covered with paintings but theses have all disappeared. At the far end of the hall is the remains of the image. The whole of the Alahana Parivena is surrounded by a wall 1,880 feet long. The main assembly hall of the monastery is to the south east and is called the Baddhasimapasada. As well as these three main buildings numerous other buildings are to be seen, mainly monk’s cells, shrines, as well as several bathing ponds. In the hospital at the Alahana Parivena is a stone medicinal bath on in which patients were immersed in medicinal oils. 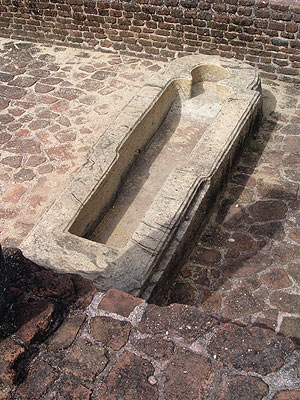 Rankotvehera is meant to be a copy of the Ruvanvalasaya and was built by Nissankamalla. It has a diameter of 186 feet and was originally 200 feet high and thus was the last great stupa to be built in Sri Lanka. The Kiri Vehera was built by Parakramabahu I, it has a diameter of 88 feet and is now 80 feet high. Parakramabahu also built the Damila stupa so called because Tamil prisoners of war did all the work.

The Temple of the Tooth
The temple is surrounded by a solid wall whose gate was originally flanked by two prosperity vases, only one of which still remains. Passing through this gate the pilgrim arrives at the entrance of the temple itself with its elaborate moonstone, guard stones and balustrades. Climbing the steps one enters the main vestibule. Note the six richly carved pillars, the small door on the north, where the presiding monks would have entered, and the stairs in the corner. These stairs would have led up to the second floor of the temple which was made entirely of wood but now has completely disappeared. Proceeding further one now enters the main shrine, in which three standing Buddha images once stood. The one remaining image is 8 feet tall and its deep eye sockets suggest that they once held gems. Vijayabahu I built this temple. Stepping over the elaborate moonstone and climbing the four steps one enters the vestibule with its richly calved pillars. The Velaikkara inscription in Tamil, which was found near the temple, describes the ceremonies that were conducted there. The inscription is in Tamil because at that time a body of Tamil mercenaries called the Velaikkaras had control of the Tooth Temple. Inscription on the north wall gives the history of the temple. The stairs in the far left corner led up to the second story which would have been made of wood and which has of course now all disappeared. Inside the main shrine were originally three Buddha statues only one which still survives. The deep eye sockets of this statue suggest that they also once held gems. Near this Hatadage built by Vijayabahu I is the Atadage built by Nissankamalla.

Hatadage
This inscription is unusual in that the king actually manages to talk about something other than himself. In the prologue he says, "This Dhamma which gives happiness and which alone deserves to be honored in the world should always be preserved". Nissankamalla makes this appeal over and over again to the rulers of the earth for the sake of their good name.

The Large Statue and the Potgul Vehera
This building is popularly believed to be a monastic library but there is nothing in its layout or structure to suggests that this is so. it consists of a rotunda with a circumference of 157 feet with an oblong vestibule attached to its eastern side. A long inscription was found here but it is no help in identifying this building or what it was used for and the pilgrim will find the whole thing of little interest. North of the Potgul Vehera and a short walk from it is a large statue carved out of a cliff. This statue does not seem to be the idealized type usually seen in Sri Lankan sculpture but rather a portrait with very distinct individual characteristics. The figure, bearded and wearing a tall rounded cap, holds either a book or a yoke in its hands. It is an imposing figure but is saved from being overbearing by its serene downcast eyes. It is a 12th century statue often referred to as "The Sage ", but popularly beleived to represent Parakramabahu I. 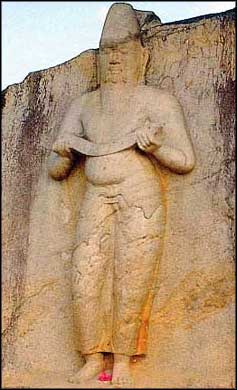 Statue of "The Sage" or King Parakramabahu 1

Vanavanmadevi Isvaram Temple
During the 70 years the Cholas ruled Sri Lanka and it is interesting that they built a temple to their gods not between or on the nearby Buddhist temples but discreetly beside them. According to the inscription on the walls of this temple it says it was built by Rajendra Cola and named after one of his queens. It is an excellent example of Chola architecture and almost perfectly preserved. The positioning of this temple says a lot about the Cohlas religious policy in Sri Lanka. Their rule was undoubtedly harsh but they were tolerant as far as religion was concerned. They could have built this temple to their god on top of the nearby Buddhist temples but instead they chose to place it discreetly near them. It is also interesting that when the Sinhalese finally succeeded in driving the Cholas out and regained their capital they did not destroy this temple.

Satmahal Prasada
At the north-east corner of the quadrangle and just outside it is an unusual monument now called the Satmahal Sasada. This consists of square pyramidal tower built in seven diminishing stages, each stage having an arched niche housing an image of a god. Who built this monument, why and what its original name was is not known; however it seems likely that it was meant to be a copy of the mythical Mount Meru, the home of the gods and the center of the world according to Hindu cosmology.

How To Get There
About 1.5 hours by bus east of Sigiriya, or 3 hours North East of Kandy.