Mathura: Visited by the Buddha and great centre of Buddhist art 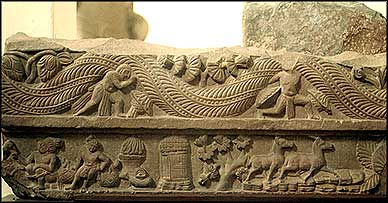 Jataka StoryThe Buddha only came to Mathura once and he doesn't seem to have been very impressed by the place. In the Anguttara Nikaya he says, "Mathura has five disadvantages. What five? The ground is uneven, there is a lot of dust, the dogs are fierce, there are evil spirits and it is difficult to get alms food". The town certainly hasn't changed very much but don't let that turn you off. If you are interested in Indian art, especially Buddhist art, Mathura is not to be missed.

The city was a great centre of Buddhism for nearly a thousand years and in that time its artists turned out an astonishing variety and amount of sculpture. The art of Mathura is to be found in collections all over the world but the biggest and most representative collection is in the city's Government Museum. As for opening and closing times, I'll quote from the museums brochure. "From July 1st to April 30th, 10: 30 am to 4: 30 pm. From May 1st to June 30th, 7.30 am to 1 pm. Week end holiday - Monday. Galleries are also closed on Sunday followed by second Saturday of the month and on gazetted holidays." I hope you can remember that! Allow at least two hours for the museum. In 2000 more than half the galleries were closed for renovations. The work is supposed to take 6 months but in India such things can sometimes take years.

Fifty eight kilometres from Mathura is Agra with its Taj Mahal and other gems of Mogul architecture which you wilMapl probably want to see. So if you leave Delhi early you can see Mathura, move on to Agra and spend the night there. If you do stay in Mathura try the Hotel Modern near the old bus stand and within walking distance of the museum. After Agra you have two choices, to take the train directly to Varanasi or to break your journey in Allahabad to visit Kosambi and then proceed to Varanasi.