For a Buddhist, beginning the journey along the road to enlightenment commences with the first understanding of the possibility of realising our Buddha nature. It is only when we fully understand this possibility of evolution into a higher being and discover the need to visualise our inner potential that we see the necessity for the development of an art form which matches our aspirations. In the religious arts of the world’s many and diverse cultures, few have provided as wide a canvas as the Tibetan on which to project visualisations of the vast range of possible aspects of the enlightened mind. 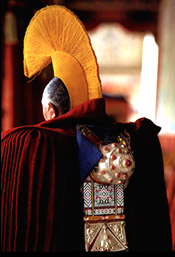 The Buddha’s task as a teacher could not even begin until works of art had opened the people’s imagination to the revelation of new perceptions. So we find that in the Buddhist scriptures almost every discourse is preceded by some sort of miracle, some dramatic revelation of an extraordinary perception to stimulate the people’s imaginations. After the Buddha’s death those who knew him began to make icons of his liberating presence, although at first it was considered that no human representation could do justice to his memory, so that symbols such as the wheel (of the Law), or the trees (of spiritual enlightenment) were used.

By the time Buddhism came to Tibet in the seventh century AD, however, the artistic expression of the Mahayana, or Universal Vehicle, had reached considerable heights of inspiration. Sakyamuni Buddha, various cosmic Buddhas, magnificent female and male Bodhisattvas, all were portrayed in splendid paradise-like settings. And with the development of Tantric Buddhism the archetypal imagery went more deeply into the unconscious mind to uncover other enlightening possibilities, both terrifying and benign.

The earliest surviving Tibetan images date from the ninth century AD, and from that time until the present a wealth of magnificent painting and sculpture survives which has served both as the focus of meditation visualisations for many generations of Buddhist adepts, as well as educational illustrations for ordinary Tibetan people. Tragically, since the Chinese occupation began in 1949, many thousands of temples with their splendid wall paintings and magnificent sculptures have been destroyed, so that today there are probably many more beautiful Tibetan works of art in Western museums and private collections than presently exist in Tibet.

Magnificent examples of Tibetan temple wall paintings still exist, however, both in Tibet itself (Tsaparang, the Gyantse Kumbum), in the Tibetan cultural areas of Indian Ladakh Alchi), and Himachal Pradesh (Tabo), in Nepal (Mustang) and in Bhutan (Paro Dzong). 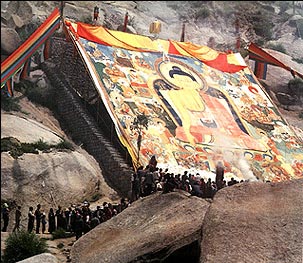 However, the painting medium best known outside Tibet is the thangka, or scroll painting. Usually painted on cotton cloth, more rarely on silk, colours are traditionally made from minerals as well as vegetable dyes. Before application they are de-saturated in varying degrees in lime and mixed with boiled gum Arabic. These ‘stone’ colours maintain their intensity so well that many old thangkas still retain striking colours. Today, Tibetan artists also use modern synthetic dyes.

Thangkas are traditionally mounted in frames of silk brocade with a pole or batten at the top and bottom so that it can be easily hung. Since it is also easily rolled up, the thangka can be stored away or readily transported from once place to another. Itinerant lamas used them as icons of personal devotion and to sanctify tents in which they held teachings of Buddhist doctrine. They are also used as effective teaching aids. In most Tibetan homes the thangka, together with small bronze images, is an integral part of the family altar and a vehicle of visual dharma.

Metal, clay, stucco, wood, stone, and butter are all used in the creation of sculptural images, yet by far the best known of these is metal, since small, portable, bronze images of a great variety of meditation deities are most frequently encountered. Nevertheless, clay and stucco have been used since ancient times, particularly in the creation of very large images installed in monasteries and temples. Wood is also widely used, intricately carved for entrances to temples and for interior pillars and in covers for scriptures in monastery libraries.

Most portable images, however, are made from metal, usually bronze, but occasionally silver or gold. Bronzes are usually made by the ‘lost wax process’, where a wax image is created, then coated with a clay based mould which is subsequently baked allowing the wax to melt and drain away, replacing it with molten metal. The finished image is often then gilded and adorned with precious and semi precious stones. Metal images are also sometimes made by the repousse method, where copper, or less commonly silver or gold, is hammered out into the required shape from `the reverse side.

Works of art are usually commissioned, either by monasteries or lay patrons, and their execution generally follows strict canonical rules as to proportions, symbols and colours, in accordance with artistic manuals.

Tibetan art is largely anonymous, and this custom of artistic anonymity is grounded in the Buddhist belief in working toward the elimination of the individual ego. The Tibetan attitude to a work of art is that when it is successfully completed it has an existence of its own and an inherent power to help the viewer come to spiritual realisation. It ceases to be the property of the artist when it leaves his studio.

The form given to a painted or sculpted image follows a clear and well defined iconography set out in the appropriate texts, whilst artists’ manuals illustrate the strict measures to be observed in achieving correct proportion and balance. The Tibetan artist, like his Indian counterpart, is not free to improvise on his personal concepts of the appearance of an individual deity but is required to work within a well defined structure. In the tantric art of Tibetan Buddhism, benign, wrathful, serene or terrifying deities all illustrate an aspect of the Buddha mind, or the potential to be found in each of us, so that the artist projects for us archetypal images from deep within our subconscious, inviting us to contemplate those aspects of our being which usually remain hidden. For the meditation practitioner, such images are models for the process of visualisation, where the adept develops the ability, through stabilised concentration and cultivated inner vision, to visualise the deity in all its phenomenal detail and then absorb this vision into him/herself and so absorb the spiritual qualities particular to that deity.

These are a complex and uniquely Tibetan concept and are usually constructed by teams of monks for a festival or religious event.

They are not entirely made from butter, however, being constructed on frames of wood and leather, to which are applied barley flour and butter dough. They are then painted. Some were truly gigantic being as high as a three storey building. After the ceremony they are destroyed. In this they are like sand mandalas such as the well known Kalachakra Sand Mandala, painstakingly constructed over many days from different coloured grains of sand before being swept away at the end of the ceremony. The symbolism behind the destruction of such works is based on the illusory nature of things, even those we cherish most.

Although Tibet had no political ties with China after the end of the Yuan Dynasty (mid 14th century), there were nevertheless frequent visits of monks and lamas to China from the great Tibetan monasteries. This enhanced trade between the two countries and added greatly to the monasteries’ wealth, at the same time providing a channel through which cultural and artistic influences enriched Tibetan life. 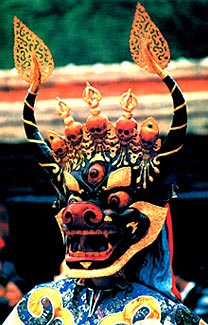 Silk brocades and richly worked robes, pearls and precious stones, ritual vessels and incense burners, gilt images and lacquered goods, all found their way into the homes of the aristocracy and into the monasteries. Tibetans produced earthenware, often of fine quality, but porcelain from China, especially since the Ming period, was also highly prized.

The Tibetan love of exuberant decoration resulted in everyday items being produced with wonderful embellishments. Nearly every item used by Tibetans was fashioned in this highly decorative way. Ink pots, tinder pouches, knives, teapots, storage vessels, all were decorated lavishly in characteristic ways.

Tibetan artisans are skilful people, and they have long produced large quantities of ornate and intricate silver and gold jewellery, often set with coral, turquoise and other precious stones. Carpet weaving for domestic and monastic use is another ancient craft, and carpets are popular products from refugee communities even today.

Carved and painted wooden tables and cabinets are still in high demand as are silver lined wooden bowls for butter tea. Crafts and decorative arts enormously enriched Tibetan life and penetrated all levels of society.

The Arts in Exile

In Dharamsala, the Centre for Tibetan Art and Crafts was established in 1977 under the auspices of His Holiness the Dalai Lama’s Charitable Trust. Its primary purpose is not only to preserve essential areas of the endangered Tibetan culture but to inspire fresh enthusiasm and creativity in Tibetan artistic expression.

Selection of students is made on the basis of both aptitude and economic background with priority given to those applicants who are particularly needy. Most of the crafts produced are exported through the offices of the Charitable Trust.

The Library of Tibetan Works and Archives (LTWA) was established in Dharamsala in 1971 as a repository for ancient cultural objects, books and manuscripts from Tibet. LTWA now has eight departments: Research and Translation, Publications, Oral History and Film Documentation, Reference (reading room), Tibetan Studies, Tibetan manuscripts, Museum, School for Thangka Painting and Wood Carving. LTWA has a team of Tibetan scholars engaged in research, translation, instruction and the publication of books.

Since its founding the Library has acquired a reputation as an international centre for Tibetan Studies. To date, more than five thousand scholars and research students from all over the world have benefited from this unique educational institution. LTWA also offers regular classes in Buddhist philosophy.

Text with kind permission from the Australian Tibetan Society (Inc)