The Temple of Borobudur 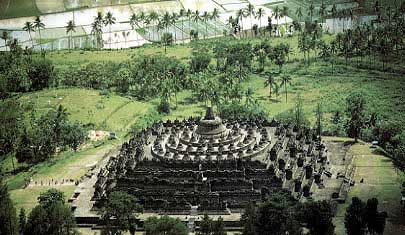 A white mist shrouds the plain and the first birdcalls across the valleys announce the imminent arrival of another dawn. Slowly the mist dissipates in the rising sun to reveal the spires and Buddhas that meditate in bliss and gradually the forms coalesce to unveil a temple that many who have seen it, consider to be the finest example of Buddhist architecture ever raised to the sky by man.

In the period 600 AD to 800 AD there was a golden age of temple construction throughout India, Ceylon and South East Asia. It was a time when Hindu and Buddhist kingdoms flourished and men raised magnificent monuments to heaven in praise of their gods with a burst of frenetic activity of cultural expression and devotion. After their periods of glory they sank into oblivion, either as a result of military conquest or natural disasters and their monuments were reclaimed by the jungle and lost to mankind for almost a thousand years.

One of the most spectacular of these is the Buddhist temple of Borobudur that lies in Eastern Java on the Kedu Plain. It is surrounded by an idyllic landscape of incomparable beauty of rice-terraced hills and overlooked by four volcanoes. The industrious subjects of the Sailendra dynasty built it over a period of 80 years in the ninth century who transformed a volcanic plug of basalt into a stepped pyramid with a base measuring 120 metres square and a height of 35 metres. 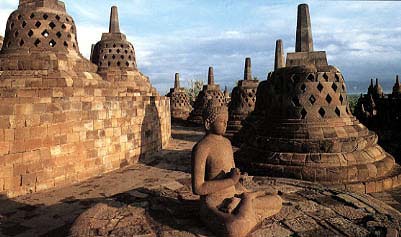 It was built to resemble a microcosm of the universe and its purpose was to provide a visual image of the teachings of the Buddha and show, in a practical manner, the steps through life that each person must follow to achieve enlightenment. The pilgrim to this shrine would first have been led around the base and shown the friezes, which illustrate the consequences of living in the World of Desire. In this realm ruled by Greed, Envy, and Ignorance, man is a slave to earthly desires and suffers from the illusions that are caused by these unfulfilled yearnings, a state regarded as hell by Buddhists. After completing this circuit, the pilgrim was then led in a clockwise fashion through five levels in a gradual ascension of the pyramid. Here he was shown how to conquer desire and attachment by viewing 1300 panelled friezes that illustrate the life of the Buddha and his previous incarnations. These levels were called the World of Form and correspond to the earthly realm in Buddhist symbology. The passages of both of these realms followed the square shape of the pyramid but above these two lay the World of Formlessness where the right-angled, heavily decorated passages gave way to a round unadorned summit where meditating Buddhas and saints sit in supreme bliss contemplating a view of exquisite beauty. In the centre a bell shaped tower, or stupa, points to heaven, a blissful realm beyond form and concept, known as Nirvana.

Encompassing the totality of existence with its representations of heaven, earth, and hell in this metaphor of stone, the monument was abandoned after a severe earthquake and a large eruption of the volcano Merapi in 1006 AD until it was rediscovered by the West during colonial times. One of the miracles, perhaps equalling the miracle of its construction and craftsmanship, is that the monument still exists and can be seen to this day. This area of Java is one of the most earthquake prone regions in the world as well as one of the most volcanic. From the top of the temple, the volcano Merapi is easily visible, still smoking to this day, having erupted on more than a few occasions during the last millennia.

Reliefs depicting the life of the Buddha cover the upper half of the main wall all around the first gallery of the monument, a total of 120 panels. These reliefs were carved to illustrate a text entitled the Lalitavistara, "The Unfolding of the Play." The above relief shows Sakyamuni having left the palace and dismissed his horse and groom, stands at the left beneath a parasol, bidding farewell to the supernatural beings who accompanied him.

>>> Carving of the Borobodur Reliefs

The Dutch carried out some piecemeal reconstruction during colonial times but it was left to the Indonesian government to make a complete restoration with help from the United Nations in the seventies and eighties. This huge task has now been completed so that the temple is now in better shape than it has been since the major eruption of Merapi in 1006 AD. This architectural jewel is now conserved for the benefit of future generations and provides a wealth of information on the way of life 1200 years ago as well as preserving its spiritual message. The panels show a sophisticated and elegant society and are a pictorial history of the architecture, means of transport, dress, and customs of a race of people whose culture rose and fell a thousand years ago and who left this astounding monument as a testament to their skill and devotion.

Borobudur can truly be called one of the wonders of the world, one of those rare places where the compassionate, aesthetic beauty of mankind's nature can be glimpsed, a place where that centre of peace and stillness within us all can be felt, and a symbol of the imagination and industriousness of the human race.