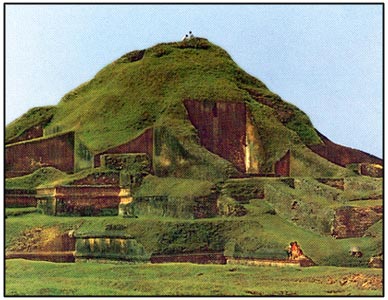 Due to its geographical situation the entire region of Bengal, including the Paharpur Buddhist Vihara, has been one of the vital links between India and Southeast Asia since ancient times.

With the flourishing of trade and cultural exchange Buddhism entered from India in the 5th century and its religious influence gradually increased.

This region witnessed the ascendance of the Pala Dynasty in the 8th century, whose rule continued until the 12th century. The first King Gopala of the Pala Dynasty established a unified power in the Bengal region. Then the most prominent political power in India at that time was achieved under the rule of the succeeding second King Dharmapala. Later, in the period of the third King Devapala, the region experienced the peak of its prosperity.

Buddhism attained its last major developments in India at that time under these Pala Dynasty Kings, who embraced and protected the Buddhist ideals. The successive kings established many Buddhist temples. The Vikrashiya temple in the Bihar State of northern India and the Paharpur Buddhist Vihara were built under the second King Dharmapala. It is said that when Buddhism was the prevailing religion in the area, practicing Buddhist monks gathered in their endeavours for enlightenment, but Buddhism itself was gradually being forced out by the increasing influence of the Hinduism and it started to show signs of decline.

Evidence of the rise of Mahayana Buddhism in Bengal from the 7th century onwards, this monastery, known as Somapura Mahavira, the Great Monastery, was a renowned intellectual centre until the 17th century. Its layout perfectly adapted to its religious function, this monastery-city represents a unique artistic achievement which influenced Buddhist architecture as far away as Cambodia, with its simple and harmonious lines and its many carved decorations.

The monastery is distinguished by its unique uniform style of architecture. The terracotta plaques of musicians, snake charmers and animal, etc., decorating the outer walls of the temple depict the life of common people who lived a thousand years ago.

Then with the advancing influence of the Islam from the last part of the 12th century to the 13th century, the Buddhism in this area reached its point of devastation. The ruins of the Buddhist Vihara were discovered by Buchanan Hamilton, who visited the site in the early 19th century whilst surveying this area for the East India Company. After that Alexander Cunningham, the first Director of the Archaeological Survey of India and often called "the father of the Indian Archaeology", had a plan to excavate the Vihara in 1879, but the landlord did not give him his permission.

In 1923 the excavation was started at last by the initiative of the Archaeological Survey of India. This excavation continued until 1934 and the devoted work of K. N. Dikshit, one of the senior officers of the Survey, and others achieved the tremendous result to clarify the whole structure of the Vihara. Continued excavation and conservation activities showed that the degradation was becoming a problem, so the Government of Bangladesh started to request assistance and contribution to such kinds of activities from international resources. At the 21st UNESCO General Conference held in November 1980, a resolution was adopted to take up the ruins of the Buddhist Vihara at Paharpur and the Historic Mosque City of Bagerhat, Bangladesh, as target heritage sites for the UNESCO's international campaign to safeguard the cultural heritage. In accordance with this decision a UNESCO mission visited Bangladesh from February through March 1982 with the support of the United Nations Development Programme (UNDP) and a master plan for the conservation of both heritage sites was completed in 1983. The international safeguarding campaign officially commenced in 1985 when Paharpur Buddhist Vihara was included in the World Heritage List.