Prior to the arrival of Buddhism, the main religious practice in Korea was that of Shamanism which still holds a significant place in Korean life. Shamanism holds that human beings as well as natural forces and inanimate objects all possess spirits which must be appeased. Even the highly educated and devout Buddhist Koreans have a strong belief in spirits and regularly visit the Shaman for a protective ritual. 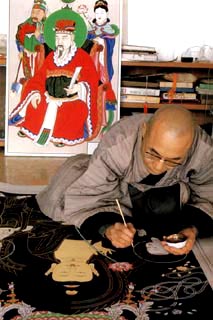 Since Shamanism was not seen to be morally in conflict with Buddhism, the two religions blended to produce a form of Buddhism that is uniquely Korean. It is assumed that Buddhism first arrived on the Korean peninsular in 372 A.D. when a monk arrived from China bringing Chinese texts and statues. It was an elementary form of Buddhism that he taught, consisting of the teaching of Karma and the search for happiness which seemed to blend well with the indigenous Shamanism, so it was quickly assimilated.

At that time the peninsular consisted of three separate kingdoms of Koguryo to the north, Paekje to the south west and Shilla on the south east. It was in Koguryo that Buddhism was first established. In 384 the King of Paekje was converted to Buddhism and decreed that his subjects should follow suit. It was not until 527, however, that Buddhism became established in Shilla where it flourished. In 668 A.D. Shilla conquered the other kingdoms and Korea was unified. During the United Shilla Period, the arts flourished producing such magnificent items as the Sokuram image, which is in a cave near Kyongju, the beautiful Maitreya image and the Pulguksa temple in Kyongju with its famous twin stupas. The Koryo Dynasty which gave its name to present day Korea, assumed power in the 10th century. Its era heralded such important events as the creation of the Korean Tripitaka, the most complete collection of the Buddhist scriptures carved by hand in Chinese characters on over 80,000 wood blocks, as well as the birth of the famous monk Chi-nul who stressed a balance between the "mind only" meditation practice of Son and the study of the scriptures which is today the main feature of Korean Son practice. Chi-nul founded the Songgkwangsa temple on Mount Chogye, and this temple remained the headquarters of the Chogye sect which is the main sect of Korean Son to this day. From the 14th century, with the assumption to the throne of the Chosun or Yi Dynasty and their adoption of Neo-Confucianism, Buddhism fell into decline. They destroyed all Buddhist temples in the main cities and banished the monks to the mountains where, even today, the main temples are to be found. With the Japanese occupation from 1910 to 1945, Buddhism was again tolerated but the celibate monk were forced to take wives. Today, Korea, which was once a leading Buddhist country, boasts only 50% of the population practicing this religion. 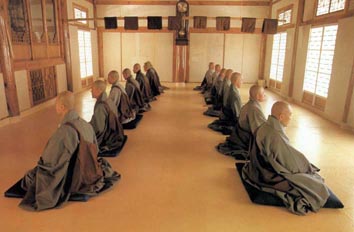 The daily routine in a Son temple usually commences at 3 a.m. when the monks awaken to the sound of the Moktak, wooden hand drum, shaped like a fish. The legend tells of a naughty monk, who, after he died, was reborn as a fish. Out of his back grew a tree which caused him much pain. One day, his former teacher saw him swimming in a river and recognised him. He begged his teacher to remove the tree and carve a fish shaped instrument from it. The master did so and the sound of the Moktak has inspired the people whenever it is played in the temple. The monks arise and prepare themselves for morning chanting and meditation. 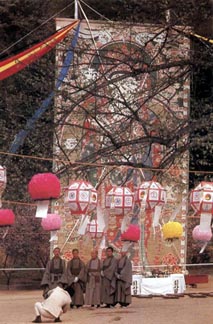 Monks in the meditation hall sit in straight lines so as not to look at each other, but only concentrate on the process of meditation. The monks are summoned to the meditation hall by the sound of a large bell which calls all humans, a drum which calls the animals, a cloud shaped gong which calls creatures of the air and a large log carved into the shape of a fish which calls all creatures that live in water. These sounds invite all sentient beings to listen to the chanting of the words of liberation taught by the Buddha. Buddhism holds as sacred what is known as the Triple Gem (Triratana in Sanskrit), which is the Buddha - the Teacher, the Dharma or his Teaching, and the Sangha or the order of followers - the clergy. Korea has temples devoted to each of these Gems. The T'ongdo - Sa (Sa is the Korean word for temple) is devoted to the Buddha as relics of the Buddha are enshrined there in a sacred stupa. The Haein - Sa represents the Teaching as it houses the famous wood blocks of the Buddhist texts or the Tripitaka Koreana. These wood blocks which are held in the library are, perhaps, the oldest wood blocks still used for printing which still exist in the world. The third temple of the Triple Gem is Songgwang - Sa.

Early in the present century, the great master Ku-San established the International Zen Centre at this temple and it attracted students, from all over the world, who live and practice the Zen way of life there. The only important temple in Seoul, the Capital City, is the Chogye - Sa, which is the current headquarters of the Chogye sect founded by Chi-nul and the largest of the more than eighteen sects of Buddhism currently operating in Korea.

April 8th by the lunar calendar is celebrated as the Buddha's birthday and is considered in Korea as an important holiday. Large Buddhist murals, which during the year are kept in storage, are hung in the temple courtyard. Painted with pigments these murals have been uniquely developed through Korean Buddhism. Also during this auspicious day large paper lanterns are bought by pilgrims to be hung in the temple courtyard. At night a candle is placed inside the lantern. The glowing lantern symbolises the effort of pilgrims to light the way for ignorant people to seek Nirvana.