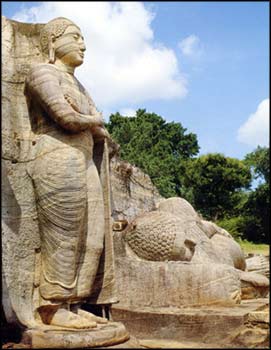 Sri Lanka is the oldest continually Buddhist country, Theravada Buddhism being the major religion in the island since its official introduction in the 2nd century BC by Venerable Mahinda, the son of the Emperor Ashoka of India during the reign of King Devanampiya- Tissa. Later, the nun Sanghamitta, the daughter of Asoka, was said to have brought the southern branch of the original Bodhi tree, where it was planted at Anuradhapura. From that day up to the present, the Buddhists in Sri Lanka have paid and are paying the utmost reverence to this branch of the Bodhi Tree under the shade of which the Master achieved Enlightenment.

Monks from Sri Lanka have had an important role in spreading both Theravada and Mahayana throughout South-east Asia. It was in Sri Lanka, in the 1st century AD during the reign of King Vatta Gamini that the Buddhist monks assembled in Aloka-Vihara and wrote down the Tripitaka, the three basket of the Teachings, known as the Pali scriptures for the first time. It was Sri Lankan nuns who introduced the Sangha of nuns into China in 433AD. In the 16th century the Portuguese conquered Sri Lanka and savagely persecuted Buddhism as did the Dutch who followed them.

When the British won control at the beginning of the 19th century Buddhism was well into decline, a situation that encouraged the English missionaries that then began to flood the island. But against all expectations the monastic and lay community brought about a major revival from about 1860 onwards, a movement that went hand in hand with growing nationalism.

Since then Buddhism has flourished and Sri Lankan monks and expatriate lay people have been prominent in spreading Theravada Buddhism in Asia, the West and even in Africa.

Some of the most marvellous monuments in the Buddhist world belong to Sri Lanka, and her sculpture is closely associated with the early art of the Krishna valley and the later Pallava and Chola kings, owing to the close relationship that existed between south India and Sri Lanka. (above: Seven-metre-tall standing image of the Buddha in a rare cross-armed pose at Gal Vihara). 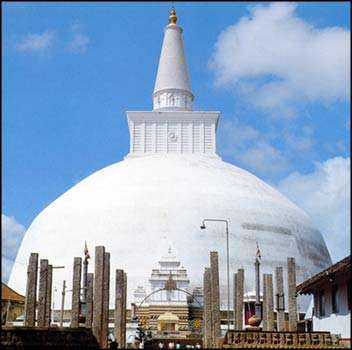 According to the Sri Lankan chronicles, the Mahavamsa, one of Ashoka's sons, the monk Mahinda, supervised construction of monastic buildings nearRuwanweliseya StupaAnuradhapura. Simultaneously, he sent to India for relics. These, say the histories, included the Buddha's alms bowl andhis right collarbone. Later a hair relic, and in the 4th century AD, the Buddha's tooth would be taken to Sri Lanka. The tooth is still preserved in Kandy where daily rituals venerate the Buddha's tooth relic in Temple of the Tooth Relic, Kandy 16th Century.

To house the relics, stupas were built. Standing at 300 feet, Ruwanweliseya, or the "Great Stupa" is regarded as one of the most important stupas at Anuradhapura in north-central Sri Lanka: Much restored, the great dome, circled with old columns, is still to be seen in Anuradhapura, now a great park. During major festivals it is crowded with hundreds of thousands of devotees in family groups, who picnic happily among the ruins and offer puja at the Bodhi tree. There are other important monuments nearby at Mihintale, the site of Mahinda's first sermon to King Devanampiya-Tissa. The ruins of the later capital at Polonnaruwa (9th century AD onwards), showing Hindu and Mahayana cultic influence, are yet more elaborate.

The stupa in Sri Lanka is a circular drum on a square base with a long succession of compressed umbrellas forming a conical top over a box-shaped harmika, of which the Ruwanweliseya stupa, (above right) at Anuradhapura (3rd century BC) is a fine example.