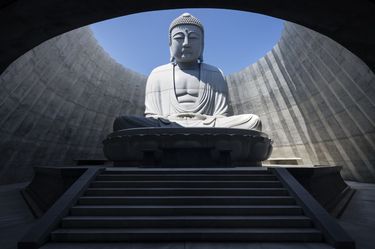 The Tibetan Canon which consists of two parts: (1) the bKángjur ("Translation of the Word of the Buddha"), pronounced Kanjur, and (2) the bStan-'gyur ("Translations of the Teachings") pronounced Tanjur. Because this latter collection contains works attributed to individuals other than the Buddha, it is considered only semi-canonical. The first printing of the Kanjur occurred not in Tibet, but in China (Beijing), being completed in 1411. The first Tibetan edition of the canon was at sNar-tang with the Kanjur appearing in 1731, followed by the Tanjur in 1742. Other famous editions of the canon were printed at Derge and Co-ne.

(a) bKángjur (Kanjur): Translation of the Word of the Buddha; 98 Volumes (according to the Narthang edition).

The second, the Tanjur (bStan-'gyur) is a supplement to the former, or in other words, continuation of the tradition of the Kanjur. Among its contents are a collection of stories, the commentaries on the Tantra section of the Kanjur and the commentaries on the sutra section. There are also works relating to Abhidharma and Vinaya as well as Madhyamika and Vijnanavada. Works coming under the sutra section of the Tanjur are not necessarily commentaries on the texts contained in the Mdo-section of the Kanjur. They are believed to be authoritative works, some of which, however, are not even Buddhist in character. They deal with logic, grammar, lexicography, poetry and drama, medicine and chemistry, astrology and divination, painting and biographies of saints. Their inclusion in this part of the Tibetan Canon is perhaps justified on the acceptance of the position that they are necessary aids and accompaniments in the practice of the religion.

(b) bStan-'gyur (Tanjur): Translations of the Teachings 224 Volumes (3626 texts) according to the Beijing edition.