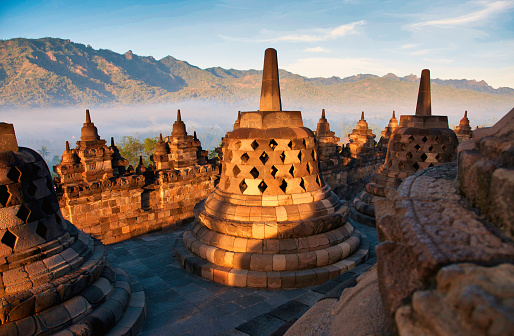 The Tripitaka [Sanskrit] [Pali: Tipitaka] is the Canon of the Buddhists, both Theravada and Mahayana. Thus it is possible to speak of several Canons such as the Sthaviravada, Sarvastivada and Mahayana as well as in term of languages like Pali, Chinese and Tibetan. The word is used basically to refer to the literature, the authorship of which is directly or indirectly ascribed to the Buddha himself.

It is generally believed that whatever was the teaching of the Buddha, conceived under Dhamma and Vinaya, it was rehearsed soon after his death by a fairly representative body of disciples. The later systematised threefold division, into Sutta, Vinaya and Abhidhamma is based on this collection. Sharing a common body of Dhamma and Vinaya, the early Buddhist disciples appear to have remained united for about a century.

The Council of Vesali or the second Buddhist Council saw the break up of this original body and as many as eighteen separate schools were known to exist by about the first century B.C. It is reasonable to assume that each of these schools would have opted to possess a Tripitaka of their own or rather their own recension of the Tripitaka, perhaps with a considerably large common core.

It has long been claimed that the Buddha, as he went about teaching in the Gangetic valley in India during the 6th and 5th centuries B.C.E., used Magadhi or the language of Magadha as his medium of communication. Attempts have been made to identify this Magadhan dialect with Pali, the language in which the texts of the Sthaviravada school are recorded. Hence we speak of a Pali Canon, i.e., the literature of the Sthaviravadins which is believed to be the original word of the Buddha.

At any rate, this is the only complete recension we possess and the Pali texts seem to preserve an older tradition much more than most of the extant Buddhist works in other languages. Further, the Sthaviravadins admit two other major divisions of Pali Buddhist literature which are non-Canonical. They are:

1. Post-Canonical Pali literature including works like Petakopadesa and Milindapanha, the authorship of which is ascribed to one or more disciples.

(a) Atthakatha or Commentaries, the original version of which is believed to have been taken over to Sri Lanka by Thera Mahinda, the missionary sent by Asoka and

(b) the different strata of Tika or Sub-Commentaries, contributions to which were made by Buddhist monks of Sri Lanka, India and Burma.

Speaking further of the Tripitaka in terms of language we have in Chinese different recensions of the Canon (preserved in part) belonging to different schools. These recensions are primarily based on the Tripitaka of Indian origin. In addition to the ancient texts which these recensions preserve they also contain independent expositions of the early doctrines or commentarial literature on them. The Chinese Canon preserves the Vinaya texts of as many as seven different schools. In place of the division into ‘canonical groups’ of Sutra, Abhidharma and Vinaya, this new arrangement seems to reckon with a live and continuous tradition in accepting as authoritative both the Sutra (or words of Buddha) and Sastra (or commentaries, treatises, etc. of disciples of a later date).

It becomes clear from the foregoing analysis that in speaking of a Buddhist Canon one has to admit that it is both vast in extent and complex in character. While the earlier and more orthodox schools of Buddhism reserved the term Canonical to refer to the Body of literature, the greater part of which could be reasonably ascribed to the Buddha himself, other traditions which developed further away from the centre of activity of the Buddha and at a relatively later date choose to lay under the term Canon the entire mosaic of Buddhist literature in their possession, which is of varied authorship and is at times extremely heterogeneous in character.