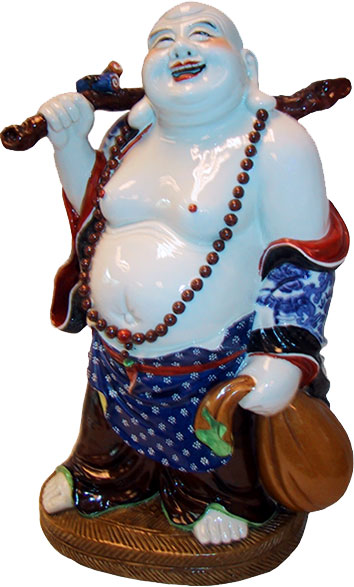 Maitreya, "The Friendly and Benevolent One" or "One Who Possesses Loving-kindness" is widely adored by the Chinese Buddhists for his willingness to grant help to those who direct their minds towards him. He is also known as Ajita, 'the Unconquered' and ranks equal with the other great Bodhisattvas such as Avalokitesvara, Manjusri, Samanthabadra, Mahasthamaprata and Ksitigarbha. As the next Buddha-to-be he alone enjoys the distinction of being the only Bodhisattva recognised and popularly accepted by both Mahayanist and Theravadin countries.

Maitreya has taken numerous incarnations in various Buddhist countries and China has had quite a fair share of them. Historically, the most important amongst them, is said to be that as the son of a King of Varanise in Central Asia. Record has it that he was born with the full thirty-two marks of a superior being who subsequently became a disciple of Sakyamuni Buddha and was one of the main interlocutors in the Mahayana Sutras where he conversed with some of the great disciples of the Buddha.

Although he is, strictly speaking, still a Bodhisattva of the ninth stage, the tenth being that of a fully Enlightened Buddha, he is often worshipped as a Buddha in anticipation of his becoming the next Blessed One in the future. Both as Bodhisattva and Buddha he now resides in the Tusita Heaven, the Heavenly Realm of the Devas, where all the Buddhas-to-be will always reside; pending their appearance as Buddha on earth to save mankind and thereby traversing the tenth and final stage or 'Bhumi', to attain Supreme Buddhahood for the sake of benefitting all sentient beings.

Being compassionate, Maitreya always grants help willingly to those who pray to him with faith and the simple prayer to recite is: "NAMO MI-LO FWO"

The manner of praying to Maitreya is similar to those methods as described in the sections on Kuan Shih Yin and Amitabha Buddha. Firm faith, purity of intention and effort will be the main factors of success of their prayers. Among the many reasons for worshipping Maitreya or Mi-Lo-Fwo are these two most outstanding aspects:

1. To take rebirth in Tusita Heaven, a kind of Pure Land, so as to receive the teaching of the Dharma.
2. To gain sufficient merits so as to obtain a rebirth during His appearance on earth, to hear His teachings and be saved by Him.

Generally the Chinese worship him for wealth and happiness and there are those who even believed strongly that he is able to bequeath them with children as one of his most popular forms is that with five children surrounding him. However the images of him that are found in the temples normally depict a fat genial laughing figure with a mountainous belly, in a sitting posture, and having a large bag beside him.

Because of this appearance, many people choose to call him 'The Laughing Buddha'. Such a depiction by his Chinese devotees is a far cry from what other Buddhists of other lands imagined him to be, but this does not mean that the Chinese do not revere him as much as others do. This portraiture of him came about as a result of one of his memorable emanations in China during the end of the Tang period and the beginning of the Wu-Tai Dynasty (907-1060). There was a learned monk whom everyone addressed as Pu Tai, meaning 'Cloth Bag', as he was always seen carrying a large hemp bag wherever he went. He was a native of the Chekiang Province who went about propagating the Buddha Dharma. No one really knew his true name although he had called himself 'Chi Tze', and because of his bag, the people preferred to refer to him as 'the monk with the sack'. Here he appeared as one who is extremely kind, jovial and helpful and although he had no home or temple which he could call his own, he was always in a cheerful mood. He wandered about here and there to beg for food, giving advice and teaching to those who cared to hear him, or he could be seen collecting all kinds of things which he would put into his bag. To the worldly ones this act may be reckoned as an act of greed but it really meant that he was ever seeking to help deliver beings into his Pure Land.

As the people got to know him better they soon discovered that he was also extremely good at reading their fortune and predicting the weather. Even by his daily actions they were able to guess the outcome of the weather conditions for whenever he was seen hurrying around in wet sandals, rain was sure to follow, and whenever he was seen wearing shoes and relaxing here and there bright and sunny days would prevail. He also had many other peculiarities some of which bore similarities with those of another famous monk CHI KUNG of the Sung Dynasty. Pu Tai was often seen to be sleeping very comfortably on the snow during the cold winters and resisted taking a bath during the hot summers. He died in a sitting posture at the corridor of a temple and left behind a verse which said:

"Maitreya is a real Maitreya, who manifests uncountable transformed bodies.
Constantly he manifests before living beings who are not able to recognise them!'

Through this verse, people later began to accept him as an incarnation of the Maitreya Buddha, which also explains the accepted appearance of the current day's depiction of him.

In his many other recorded incarnations in China, he frequently appeared as great and learned persons whose lives have been recorded in many books. The followers of the Tien Tao Movement, an energetic religious Order which embraces all the three great Chinese religions of Confucianism, Taoism and Buddhism, claimed that Maitreya made his appearance in China as their great teacher at the beginning of this century. However all these are but the minor transformed bodies of the Great Being whose real essence is now residing in the Temple of the Palace of the Seven Jewels of the Tusita Heaven. Buddhists are more concerned with his final incamation when he ascends to the state of a Fully Enlightened Buddha to save countless beings from the world. In the meantime one should direct his energy to develop a strong affinity with Maitreya Buddha by reciting his name daily and living in a virtuous manner.

Maitreya Buddha's birthday is celebrated on the 1st day of the 1st moon of the Chinese lunar calendar which coincides with the Chinese New Year Day, a day of joy in which all families traditionally keep pure and holy by avoiding the eating of any meat.