An ancient name Mandala Mountain Monastery (Mandalagiri Vihara) 14 miles from Minneria. It is not known who first established it but earilest reference is in the Mahavamsa where it says Kanittha Tissa (166-184) built an uposatha house there. The Malayaraja built the dome over the stupa there during the reign of Aggabodhi that is the shrine we see today. In the 9th century a hospital was built there. The place was restored by Vijayabahu I. In the dispute between Parakramabahu and Gajabahu II it is said that Gajabahu came to Medirigiriya and carved the agreement on a rock. The inscription has not been found but a copy is known. Nissankamalla came to Medrigiriya on one of his pilgrimages or tours of inspection through his realm. The stupa is built on a huge exposed rock. And was built some 800 years before the thing that later enclosed it. Facing the four cardinal directions are four beautiflul Buddhas on pedestals. Only the one on the east is intact. 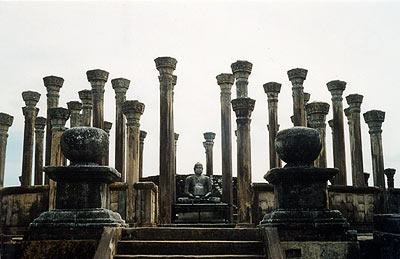 The stupa is surrounded by three concentric circles of pillars. Between the second and third row of pillars was the outer wall of which little remains. The pillars supported a domed roof above the stupa. The circular terrace on which the stupa sits is 91feet in diameter and is held up by a huge retaining wall. Entrance to the stupa is from the northern side where a terrace and flight of stairs leads from a gate house. When one of these pillars was removed so it could be straightened a sheet of beatened gold was found under it which had the famous 'iti pi so' eulogy on it and dating from about the 8th century. A Medirigiriya inscription says that patients from the hospital were not allowd to wander about in the village and that a certain number of goats and chickens should be allotted to the hospital. 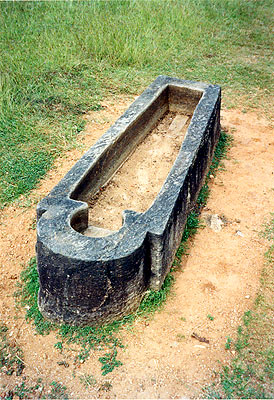 It seems that during the 12th century the monks of Medirigiriya together with some others played an important role in solving a major political crisis then afflicting Sri Lanka. Gajabahu II and the headstrong rebel Parakramabahu were locked in a bitter struggle for the throne. Both sides were equally matched and the conflict dragged on causing great loss of life on both sides and weakening the whole country. Finally the monks decided that something had to be done. They used their moral authority to get both sides to cease hostilities and then worked out a delicate and fruitful conpromise between them. Gajabahu who was old and had no heir agreed to designate Pabakramabahu who was still young as his suscessor if he ceased his rebellion. This meant that the former could live out the rest of his days as king while the latter would not have to wait too long before becoming king himself. The agreement held and peace was restored. To make sure both sides would not go back on their promise the agreement was inscribed on two stone pillars, one copy being kept at Medirigiriya and the other at Samgamuva. It is the finest ampitheatre in Sri Lanka. The dwarfs and lions on the capitals are particularly finely carved. There are four sitting images with their backs to the stupa. Little of the stupa itself remains it having been destroyed by treasure hunters.

The small temples
There are four image houses around the main temple. The first has three fine standing Buddha images in it. The middle one being slightly higher than the others.

How To Get There
The ruins of Medirigiriya are located north of Polonnaruwa.