It is on the banks of the Mahavali river. Legend says this was the first stupa in Sri Lanka. The Buddha is said to have visited Mahiyangana nine months after his enlightenment on the full moon of Phussa (Dec – Jan). Foreseeing that the Dhamma would become established in Lanka he came to dispel the yakkhas and preach to the devas. As he was about to leave, Samantha who had become a Stream Enterer, begged him to give the devas an object of worship and so the Buddha gave him a few hairs from his head. On receiving the hairs Samantha, placed them in a golden urn and then enshrined them in a stupa of blue sapphire seven cubits high. The Mahavamsa says that after the Buddha’s cremation a monk named Sarabhu took some ashes from the pyre and bought them to Sri Lanka where he deposited them in the sapphire stupa and then encased it in brick and stone. This, according to the legend, is the stupa that we see today. Moving from legend to history the Mahavamsa says that at the time of Devananpiyatissa, Prince Uddhaya Culabhaya enlarged the stupa making it 30 cubits high. Duttagamani enlarged it further and on orders from Vijayabahu I it underwent major renovations. An inscription dating from the 10th century gives an example of the unexpected benefits of pilgrimage. When King Udaya IV visited Mahiyangana on pilgrimage some of his subjects begged an audience with him and informed him of numerous malpractices in the local market. The king consequently ordered his officers to draw up new regulations for the better running of the market. 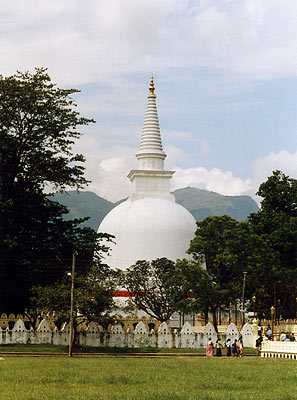 Several of the kings of Kandy made pilgrimages to Mahiyangana. King Narendrasinghe went twice and King Virawickrama performed the whole pilgrimage on foot. By the 19th century the stupa and most of the shrines around it were in a very dilapidated state and in 1949 a society was formed to restore it. The Department of Archaeology was invited to do a thorough investigation of the stupa before it was repaired. The relic chamber was opened and its walls were found to covered with paintings, their colours as fresh as if they had just been done. The paintings show the Buddha being tempted by Mara as he sits under the Bodhi Tree. Other paintings show Brahma, Siva, Vishnu and other devas. The relic chamber is thought to date from Vijayabahu’s renovations in the 11th century and has now been reassembled in the Anuradhapura museum.

How To Get There
Mahiyangana is 42 km from Kandy.