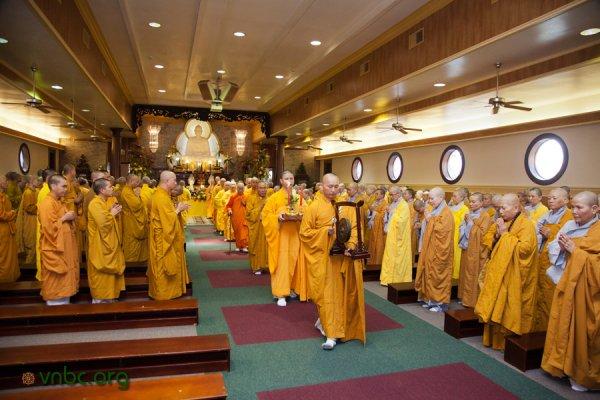 The next important tradition is Mahayana, meaning Great Vehicle, which grew out of the Savakayana and began to emerge as a separate movement between the 1st century BC and the 2nd century AD. The factors that led to its emergence are complex and obscure. A major factor may have been the gradual working out of the full implications of what the Buddha had taught. Other factors were the shift in emphasis from meditation to philosophical speculation, accommodating the needs of the lay community and the need to respond to the challenge of the revival of Hinduism from the 3rd century onwards. Mahayana has developed a wide variety of doctrines, so wide in fact that it is difficult to summarise any that are common to all of its schools. Mahayana eventually became the dominant Buddhism throughout India (except in South India where Theravada prevailed until the 12th century) but it broke into numerous schools and proved to be unable to cope with the triumphant Hinduism to which it gradually succumbed after the 9th century AD. From the 2nd century Mahayana spread to central Asia, China, Korea, Japan and Vietnam. The 20th century has presented many challenges to Mahayana. In China stagnation and internal corruption from the 16th century onwards and Nationalist and Communist hostility in the 20th century has led to its serious decline. In Vietnam and particularly in Korea it has lost many followers to Christianity and in Japan withdrawal of State support and corruption in the 19th century and secularisation in the 20th century has left it rather insipid. In Taiwan however, Mahayana is at present undergoing a major revival. The only Mahayana school that has had a significant appeal in the West is Zen.