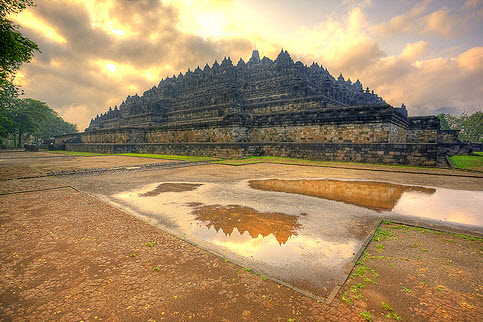 Law of Causal Condition: The fundamental doctrine of Buddhism that all phenomena in the universe are produced by causation. Since all phenomena result from the complicated causes and effects, all existing things in the universe are inter-dependent, i.e., no self nature or existence on its own. Moreover, all phenomena and things are impermanent (i.e. changing constantly). It was to this law that Shakyamuni was awakened when he attained enlightenment.

Law of Karma: The results of actions, which produce effects that may be either good or bad. It is derived from the Law of Causal Condition (Law of Cause and Effect).

Liberation: The state of complete personal freedom from suffering and its causes (delusion and karma).

Loka-Dhamma: (Pali) "Worldly Conditions", eight things are called Worldly Conditions, since they arise in connection with worldly life: Gain and loss, honour and dishonour, happiness and misery, praise and blame.

Lokuttra: (Pali) 'Supermundane', is a term for the four paths and the four fruits of the Sotapatti.

Lotus Sutra: Short name of the Sutra of the Lotus Flower of the Wonderful Law, or Saddharma-pundarik-sutra in Sanskrit. It is one of the most important sutras of Mahayana Buddhism. Basically, it states that all sentient beings can attain Buddhahood, and nothing less than this is the appropriate final goal of all Buddhists. It also states that the Buddha is eternal, and the supreme form of Buddhist practice is the way of the Bodhisattva. Lotus flower is used to describe the brightness and pureness of the One Buddha Vehicle.

Lumbini Park: The birthplace of Shakyamuni Buddha, which lay between the state of the Shakyas and the Koliyas.

Madhyamaka: (Sanskrit) The middle way, a system of analysis founded by Nagarjuna, based on the prajnaparamita sutras of Shakyamuni Buddha, and considered to be the supreme presentation of the wisdom of emptiness.

Magadha: One of the four great kingdoms (i.e. Magadha, Kosala, Vansa, and Avanti) in ancient India. The capital of Magadha was Rajagaha. The King of Magadha, Bimbisara, became the follower of Shakyamuni.

Magga: Path, as in The Eight-fold Path (atthangika-magga).

Mahakashyapa: (Skt) Mahakassapa (Pali) The Dharma heir and most prominent disciple of Shakyamuni Buddha. The First Patriarch in the Zen Buddhist tradition, he was responsible for convening the first Buddhist council after the death of the Buddha.

Mahamaya: The mother of Shakyamuni. She was the Koliyan Princess and married to Suddhodana. She died seven days after giving birth to Shakyamuni.

Mahasanghika: Literally means the Member of the Great Order, majority, community. During the First Council, when the Sthavira or elder disciples assembled in the cave after the Buddha's death, and the other disciples (called to be Mahasanghika) assembled outside the cave. Both compiled the Tripitaka. However, the former emphasized on the rules of disciplines in the monastic community, while the latter concerned the spread of the spirit of Buddhism in lay community. As sects, the principal division took place in the Second Council.

Mahatma: The highest principle in man; a great sage.

Mahayana: (Skt) The greater vehicle; one of the two major divisions of Buddhism, as in China, Korea, Vietnam, Tibet and Japan.

Maitreya: (Skt), literally means friendly and benevolent. He will be the next Buddha in our world. He is now preaching in Tusita Heaven. He is usually represented as the fat laughing Buddha.

Majjhima-patipada: (Pali) 'Middle Path', is the whole noble eight-fold path which, by avoiding the two extemes of senual lust and self-torment leads to enlightenment and deliverence from suffering.

Makyo: (Japanese) Fantasies, hallucinations, and seemingly real mental or physical experiences that arise during zazen; they are said to be an obstacle to practice.

Mana: 'Conceit', pride, is one of the ten fetters binding one to existence.

Manas: The discriminative and deliberative faculty of mind.

Mandala: Microcosmic diagram, used as a power circle and object of contemplation in the rituals of Tantric Buddhism.

Mangala: (Pali) means in general usage, anything regarded as 'auspicious', lucky or a 'good omen'.

Manjushri: One of the principal Bodhisattvas of the Zen Buddhist tradition. Personifies wisdom and is often represented riding a lion and holding the sword of wisdom, which can cut through delusion. Also known as Monju in Japanese.

Mano: 'Mind', is in the Abhidhamma used as a synonym of vinnana (consciousness) and citta (state of consciousness, mind).

Mantra: (Skt) Sacred word or formula repeated often of only one or two syllables, used in certain Buddhist rituals.

Mara: The personification of evil and temptation.

Marpa: (Tibet 1012-96) Founder of the Kagyu tradition of Tibetan Buddhism. He was a renowned tantric master and translator, and a disciple of Naropa and the guru of Milarepa.

Maya: (Sanskrit) Illusion, popularly used in this sense. Philosophically, the phenomenal universe, being subject to differentiation and impermanence is Maya.

Meditation: The process of becoming deeply acquainted with one's own mind. see Bhavana.

Meditational Deity: A visualized figure, used in meditation, representing a specific aspect of the fully enlightened mind; for example, Tara and Avalokiteshvara.

Merit: Insight, power or energy bestowed on the mind when one performs virtuous actions.

Metta: (Pali) Love in the sense of loving-kindness; goodwill. The first of the four Brahma Viharas. The subject of the famous Metta Sutta.

Metteyya: (Pali) Matriya (Skr.) The name of the Buddha-to-be or next Buddha. A famous Bodhisattva.

Milarepa: (Tibet 1040-1123) Foremost disciple of Marpa, famous for his intense practice, devotion to his guru, attainment of enlightenment in his lifetime, and his many songs of spiritual realization.

Moggalana: One of Buddha's chief disciples, noted for his intellect.

Moha: (Pali) One of the 'Three Fires'. Mental dullness, infatuation, stupidity. The philosophical doctrine of Maya applied to the human mind.

Moksha: Ultimate release or liberation from the cycle of birth and death.

Mount Gudhakutra: Vulture Peak, the site of many of Shakyamuni Buddha's recorded discourses and important in Zen as the site of the first transmission from the Buddha to Mahakashyapa.

Mount Meru: The centre of the universe according to Buddhist cosmology.

Mu: (Japanese); does not have; Case One of the Wu Men Kuan, often the first koan of the Zen student.

Mudita: (Pali) 'Altruistic (or Sympathetic) Joy', is one of the Sublime States.

Nat: The nature spirits of Burma still worshipped in village shrines, comparable to the devatas of Sri Lanka.

Nibbana (Pali) Nirvana (Sanskrit): Literally, the "unbinding" of the mind from passion, aversion, and delusion, and from the entire round of death and rebirth. This term also denotes the extinguishing of a fire, it carries connotations of stilling, cooling, and peace.

Nidana: (Pali) The Twelve Nidanas are spokes on the Wheel of Becoming, links in the 'Chain of Causation' or Paticcasamuppada.

Nirmanakaya: (Sanskrit) The "emanation body"; the form in which the enlightened mind appears in order to benefit ordinary beings. One of the three bodies of a Buddha.

Nirodha: The end to ignorance, which causes suffering; the Third Noble Truth taught by the Buddha.

Nivarana: 'Hindrances', are five qualities which are obstacles to the mind and blind our mental vision. They are: Sensuous Desire, Ill-will, Sloth and Torpor, Restlessness and Worry and Sceptical Doubt.

Obaku Zen: School of Zen brought from China to Japan in 1654 by Yin-Yuan. (Jap. Ingen). Obaku was the teacher of Rinzai, the founder of the Rinzai school of Zen.

Pagoda: Typically an east-Asian multistoried memorial structure, ultimately derived from an elaboration of the upper portions of a stupa.

Pali: The canon of texts preserved by the Theravada school and, by extension, the language in which those texts are composed. An early language of Buddhism.

Pansil: (Pali) A shortened form of Pancha Sila, the Five Precepts. Training to abstain from the principal forms of immorality.

Parinirvana: Beyond Nirvana, the state into which one who has attained Nirvana passes at death.

Parivarta: (Sanskrit) The Mahayana doctrine of 'turning over' acquired merit for the benefit of others.

Patimokkha: Basic code of monastic discipline, composed of 227 rules for monks and 310 for nuns.

Pitaka: (Pali) Lit: 'basket'. The three Pitakas are the main divisions of the Pali Canon, the Sutta Pitaka or Sermons, the Vinaya Pitaka or Rules of the Order (Sangha), and the Abhidhamma Pitaka.

Prajna: (Sanskrit) Panna (Pali): pure and intuitive "wisdom," one of the aspects under which the goal of Buddhism is known, often personified as feminine.

Prajnaparamita: The 'Wisdom that has gone beyond', a literature compiled in India from the first century B.C.

Prapti: A force maintaining the living equilibrium of the factors composing a personality.

Pratyeka Buddha: (Skr.) One seeking salvation independently of others.

Prayer Wheel: (Tibetan) Wheel or cylinder with written prayers on or in it.

Puja: (Sanskrit) A gesture of worship or respect, usually that of raising the hands, palms together, the height of the hands indicating the degree of reverence.

Pure Land: Generally refers to the Paradise of the West, presided over by Amitabha. Also known as the Land of Ultimate Bliss. Other Buddhas have their own Pure Lands, all of which are the adornment of merits and virtues in moral or spiritual cultivation. The Pure-Land Sect whose chief tenet is salvation by faith in Amitabha; it is the popular cult in China and Japan.

Rahula: He was one of the Ten Great Disciples of Shakyamuni. He was the first in esoteric practices and in desire for instruction in the Law. He was also the son of Shakyamuni Buddha.

Rajas: (Sanskrit) Restless activity. Passion as passionate anger. One of the 'Three Fires' with Dosa and Moha.

Rajagaha: Rajagaha in Pali, Rajagrha in Sanskrit. The capital of the ancient kingdom of Magadha in India, which was the centres of culture at the time of Shakyamuni. The first monastery called the Bamboo Grove Park was built by the elder Kalanda and King Bimbisara of Magadha in Rajagaha.

Rebirth: The corollary of karma. The doctrine that each individual is born into the world again and again to inherit the effects of his deeds, or rather, that by action in this life the individual creates a fresh personality for himself in order that the results of his actions may be fulfilled in a future life.

Renunciation: The attitude of complete detachment from the experiences of samsara, seeing that there is no true pleasure or satisfaction to be found within it.

Rishi: A sage (usually a hermit).

Roshi: (Japanese) The Zen master of a monastery who takes the pupil monks in San-Zen and gives them Zen instruction.

Rupa: (Sanskrit and Pali) Body, form. As the physical body and personality, one of the five Skandhas. A Buddha Rupa is a Buddha image.