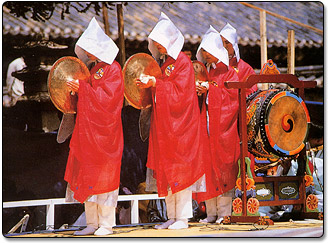 With a history that goes back to the Unified Shilla period, Korea's most renowned dance, " Sungmu" or the Monk's Dance, is an independent coming together of colour, music, and movement. Choreographed for stage presentation, it is most challenging to perform. The dance depicts the emotions of a monk torn between the monastic and mundane worlds.

The two most common ritual dances, both in praise of the Buddha, are the Butterfly Dance and the Cymbals Dance. Both are usually performed off stage in a temple compound.

Pomp'e is the most captivating form of Buddhist ceremonial music. Origination in India, it is believed to have first been brought to Shilla from Tang China by Ch'an (Son) Master Chin-gam (774-850). In pomp'e, music mixes with song and chant, solo voices interchange with chorus. Long ago, 72 instruments accompanied the singer; these days there are only thirteen instruments. Contemporary versions of Pomp'e are shorter than the lengthy chants of old, and fewer monks take the time to learn this ancient art. Consequently, it has become more frequently performed on stage. The recitative texts were originally brought to Korea in Chinese and Sanskrit but some portions are now read and recited in Korean, accompanied by only two instruments, a gong and cymbals.

Buddhist music is constantly evolving and new compositions in Buddhist hymns and popular songs have been added in recent years and becoming popular all over Korea. Now there are singing groups in most large temples and concert are frequently performed.