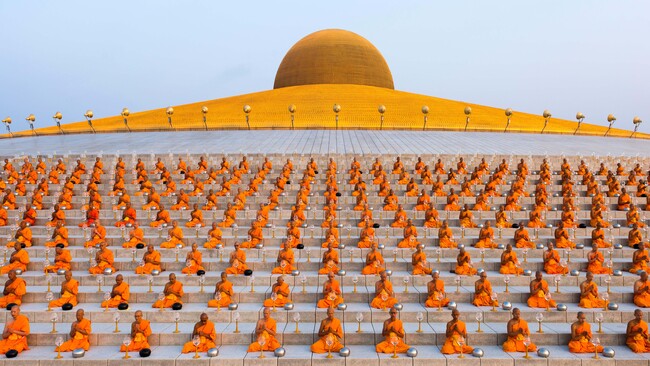 When you do devotion (vandana) by yourself in your home or at a temple you may kneel down comfortably and start your vandana directly with the salutation to the Buddha, then proceed to the formulas for the refuges and precepts.
When you do formal vandana with a monk or nun present, you make a formal request to a monk or nun to administer the refuges and precepts. This procedure preserves the religious relationship between the laity and clergy in the heritage of Theravada Buddhist practice.

After you have made making the formal request the monk or nun begins the administration of the refuges with the following formula of salutation to the Buddha. "Namo tassa bhagavato arahato samma-sambuddhassa." (I pay homage to the Blessed One, the Worthy One, the Fully Enlightened One.) The lay person repeats it three times after the monk or nun. The word for word meaning of the formula is this: "Namo" = "I pay homage"; "tassa" = "to him"; "Bhagavato" = "to the Exalted One"; "Arahato" = "to The Worthy One"; "Samma Sambuddhassa" = "to The Fully Enlightened One."

After the salutation repeat another formula three times to take Refuge in the Buddha, the Dhamma and the Sangha. These three are called the Three Refuges in the Buddhist religious tradition. They also are called the Triple Gem. By taking refuge in the Triple Gem one is initiated into the practice of the Buddha's teaching. From that point on one can be considered to be a Buddhist. However, the real Buddhist is the one who lives a life following all the principles of the Buddha's teaching with full understanding.

Taking refuge is purely a mental process of accepting the Triple Gem as one's own supreme guiding principles. In order to achieve the goal of these principles one has to follow their meanings. This means translating the Buddha's teachings into action and living by the Dhamma.

The way of following the Triple Gem is, in fact, outlined in the next section following the Triple Gem, i.e. the precepts which are divided into several categories. In this Vandana book we have included only the five precepts and the eight precepts which lay devotees are expected to observe. These are training rules that each person takes upon oneself voluntarily to uphold without any sense of intimidation or supplication to anybody outside oneself. Although putting them into action is a real challenge to one's integrity, the serious devotee makes every humanly possible effort to maintain them. If one is fully committed to the Triple Gem one may not find it impossible to put these principles into one's daily practice.

By observing these precepts you practice loving-kindness in action. When you abstain from killing you respect all living beings. When you abstain from not taking what is not given, you practice appreciative joy - you rejoice in others' happiness of having what they have. By abstaining from sexual misconduct you respect and honor the dignity of other persons. By abstaining from telling lies, you not only honor and respect truthfulness but you also maintain your own dignity and self-respect. By abstaining from taking intoxicating drinks and drugs you remain sober with a steady state of mind which can easily be trained to cultivate mindfulness leading up to the attainment of enlightenment.

If you take the three Refuges and the Five Precepts or Eight Precepts from a monk/nun the monk or nun will admonish you to practice them diligently. Then he/she will summarize in a verse the benefits of putting these principles into practice.

This is followed by the recitation of the twenty-four attributes of the Buddha, the Dhamma and the Sangha each having nine, six and nine attributes respectively. These formulas go back to the time of the Buddha himself. He used them on many occasion to describe the Triple Gem. Reciting these formulas with full understanding of their meaning and with a calm and composed state of mind instills such a deep sense of devotion in the mind of the devotee that they have been included among the subjects of meditation as recollections.