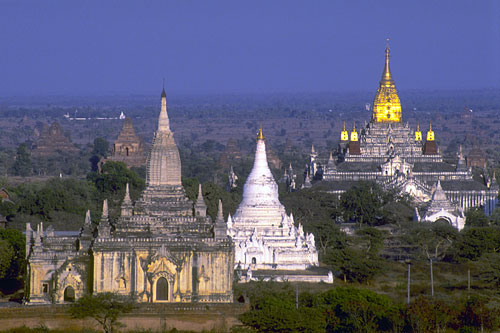 At the end of a devotional service (vandana) we ask the Buddha, the Dhamma and the Sangha to forgive us if we have done some wrong to them. Although the Buddha is not physically present in front of us, we have the image of the Buddha to represent and remind us of Him. The effect of paying respect to the name of the Buddha is not diminished in our minds whether the Buddha is present in front of us or not. Mere confidence in Him is what is necessary and sufficient for us to pay homage. The Dhamma taught by Him represents the Buddha. One who sees the Dhamma with wisdom sees the Buddha's wisdom, compassion and enlightenment in it. When we pay homage to the Buddha we feel that we are in front of the living Buddha. This feeling arouses our deep devotion and dedication to Him. Therefore when we request the Buddha to pardon us for the faults we have committed unmindfully, we humble ourselves and determine not to commit them again. Admitting one's faults becomes a sincere and honest confession.

Observance Day (Uposatha) is determined by the lunar calendar, falling on the full-moon day, the new-moon day, and the two quarter-moon days of each lunar month. The full-moon day is considered to be the most important of all of them. On the Uposatha day the monks (bhikkhus) and nuns (bhikkhunis) living in a community of four or more, gather to recite the rules of the monastic order (Patimokkha). In Buddhist countries lay Buddhists generally go to the Temple to pass the day and night, often observing the three refuges and eight precepts. They spend their time reading Dhamma books, listening to Dhamma sermons, meditating and discussing the Dhamma. Sometimes a lay Upasaka (man observing the precepts) or Upasika (woman observing the precepts) who is well versed in the Dhamma will preach Dhamma to the rest of the people if a monk or nun is not available.

On close scrutiny you will notice that all the precepts are meant to discipline your mind and focus your attention on the practice of the Dhamma. They are not formulated for parroting, but for putting into action. When the precepts are put into action they bring a very good discipline necessary for the practice of meditation, calming the mind, deepening the understanding of Dhamma and liberating our minds from numerous psychic irritants. The lay follower. undertaking this code of discipline follows a monastic life similar to that of a novice monk or nun who observes these eight precepts and two additional ones.