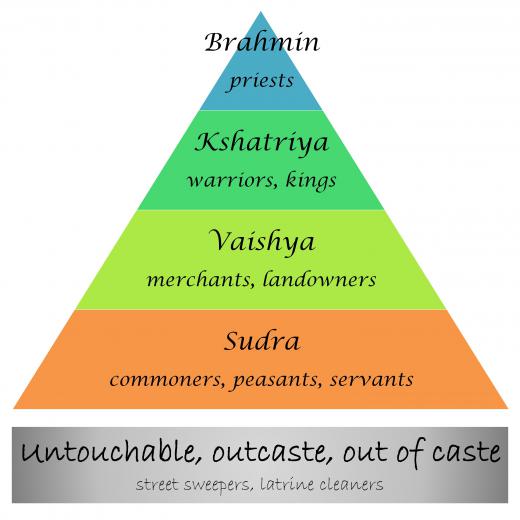 Brahmanism, the predominant religion in India during the Buddha's time, divided all humans into four castes (attu vanna), priests, warriors, traders and labourers. Social contact between each caste was minimal and the lower one's position in the system the less opportunities, the less freedom and the less rights one had. Outside the caste system were the outcasts (sudra) people considered so impure that they hardly counted as humans. The caste system was later absorbed into Hinduism, given religious sanction and legitimacy and has continued to function right up till the present. The Buddha, himself born into the warrior caste, was a severe critic of the caste system. He ridiculed the priests claims to be superior, he criticised the theological basis of the system and he welcomed into the Sangha people of all castes, including outcasts. His most famous saying on the subject is : " Birth does not make one a priest or an outcaste. Behaviour makes one either a priest or an outcaste". Even during the time when Buddhism was decaying in India and Tantrayana had adopted many aspects of Hinduism, it continued to welcome all castes and some of the greatest Tantric adepts were low castes or outcastes.

Despite this, various forms of the caste system are practised in several Buddhist countries, mainly in Sri Lanka, Tibet, and Japan where butchers, leather and metal workers and janitors are sometimes regarded as being impure. However, the system in these countries has never been either as severe or as rigid as the Hindu system and fortunately it is now beginning to fade away. The exception to this is Nepal where Tantric priests form a separate caste and will neither initiate into their priesthood or allow into their temples those of other castes.