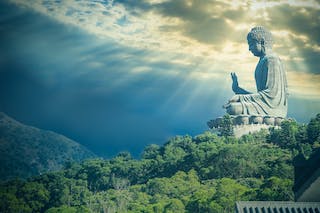 There are many special or holy days held throughout the year by the Buddhist community. Many of these days celebrate the birthdays of Bodhisattvas in the Mahayana tradition or other significant dates in the Buddhist calendar. The most significant celebration happens every May on the night of the full moon, when Buddhists all over the world celebrate the birth, enlightenment and death of the Buddha over 2,500 years ago. It has become to be known as Buddha Day.

Buddhist Festivals are always joyful occasions. Typically on a festival day, lay people will go the the local temple or monastery and offer food to the monks and take the Five Precepts and listen to a Dharma talk. In the afternoon, they distribute food to the poor to make merit and in the evening join perhaps in a ceremony of circumambulation around a stupa three times as a sign of respect to the Buddha, Dhamma, Sangha. The day will conclude with evening chanting of the Buddha's teachings and meditation.

• Buddhist New Year
In Theravadin countries, Thailand, Burma, Sri Lanka, Cambodia and Lao, the new year is celebrated for three days from the first full moon day in April. In Mahayana countries the new year starts on the first full moon day in January. However, the Buddhist New Year depends on the country of origin or ethnic background of the people. As for example, Chinese, Koreans and Vietnamese celebrate late January or early February according to the lunar calendar, whilst the Tibetans usually celebrate about one month later.

• Vesak (Buddha Day)
Traditionally, Buddha's Birthday is known as Vesak or Visakah Puja (Buddha's Birthday Celebrations). Vesak is the major Buddhist festival of the year as it celebrates the birth, enlightenment and death of the Buddha on the one day, the first full moon day in May, except in a leap year when the festival is held in June. This celebration is called Vesak being the name of the month in the Indian calendar.

• Magha Puja Day (Fourfold Assembly or Sangha Day)
Magha Puja Day takes places on the full moon day of the third lunar month (March). This holy day is observed to commemorate an important event in the life of the Buddha. This event occurred early in the Buddha's teaching life.

After the first Rains Retreat (Vassa) at the Deer Park at Sarnath, the Buddha went to Rajagaha city where 1250 Arahats, (Enlightened saints) who were the Buddha's disciples, without prior appointment, returned from their wanderings to pay respect to the Buddha. They assembled in the Veruvana Monastery with the two chief disciples of the Buddha, Ven. Sariputta and Ven. Moggalana.

The assembly is called the Fourfold Assembly because it consisted of four factors: (1) All 1,250 were Arahats; (2) All of them were ordained by the Buddha himself; (3) They assembled by themselves without any prior call; (4) It was the full moon day of Magha month (March).

• Asalha Puja Day (Dhamma Day)
Asalha Puja means to pay homage to the Buddha on the full moon day of the 8th lunar month (approximately July). It commemorates the Buddha's first teaching: the turning of the wheel of the Dhamma (Dhammacakkappavattana Sutta) to the five ascetics at the Deer Park (Sarnath) near Benares city, India. Where Kondanna, the senior ascetic attained the first level of enlightenment (the Sotapanna level of mind purity).

• Pavarana Day
This day marks the conclusion of the Rains retreat (Vassa). In the following month, the kathina ceremony is held, during which the laity gather to make formal offerings of robe cloth and other requisites to the Sangha.

• Kathina Ceremony (Robe Offering Ceremony)
The Kathina is held on any convenient date within one month of the conclusion of the three month rains retreat season (Vassa) for the monastic order. It is the time of the year when new robes and other requisites may be offered by the laity to the monks and nuns.

• Anapanasati Day
At the end of one rains retreat (Vassa), the Buddha was so pleased with the progress of the assembled monks that he encouraged them to extend their retreat for yet another month. On the full-moon day marking the end of that fourth month of retreat, he presented his now-famous instructions on mindfulness of breathing (anapanasati), which may be found in the Anapanasati Sutta (MN 118) - The Discourse on Mindfulness of Breathing.

• Abhidhamma Day
In the Burmese tradition, this day celebrates the occasion when the Buddha is said to have gone to the Tushita Heaven to teach his mother the Abhidhamma. It is held on the full moon of the seventh month of the Burmese lunar year starting in April which corresponds to the full moon day in October.

• Songkran
This Thai Buddhist festival goes on for several days during the middle of April. People clean their houses and wash their clothes and enjoy sprinkling perfumed water on the monks, novices and other people for at least two or three days. They gather around the riverbank, carrying fishes in jars to put into the water, for April is so hot in Thailand that the ponds dry out and the fish would die if not rescued. People go to the beach or river bank with jars or buckets of water and splash each other. When everyone is happily wet they are usually entertained by boat races on the river.

• Loy Krathong (Festival of Floating Bowls)
At the end of the Kathin Festival season, when the rivers and canals are full of water, the Loy Krathong Festival takes place in all parts of Thailand on the full moon night of the Twelfth Lunar month. People bring bowls made of leaves (which contain flowers), candles and incense sticks, and float them in the water. As they go, all bad luck is supposed to disappear. The traditional practice of Loy Krathong was meant to pay homage to the holy footprint of the Buddha on the beach of the Namada River in India.

• The Ploughing Festival
In May, when the moon is half-full, two white oxen pull a gold painted plough, followed by four girls dressed in white who scatter rice seeds from gold and silver baskets. This is to celebrate the Buddha's first moment of enlightenment, which is said to have happened when the Buddha was seven years old, when he had gone with his father to watched the ploughing. (Known in Thailand as Raek Na)

• The Elephant Festival
The Buddha used the example of a wild elephant which, when it is caught, is harnessed to a tame one to train. In the same way, he said, a person new to Buddhism should have a special friendship of an older Buddhist. To mark this saying, Thais hold an elephant festival on the third Saturday in November.

• The Festival of the Tooth
Kandy is a beautiful city in Sri Lanka. On a small hill is a great temple which was especially built to house a relic of the Buddha - his tooth. The tooth can never be seen, as it is kept deep inside many caskets. But once a year in August, on the night of the full moon, there is a special procession for it.

• Ulambana (Ancestor Day)
Ulambana is celebrated throughout the Mahayana tradition from the first to the fifteenth days of the seventh lunar month. It is believed that the gates of Hell are opened on the first day and the ghosts may visit the world for fifteen days. Food offerings are made during this time to relieve the sufferings of these ghosts. On the fifteenth day, Ulambana or Ancestor Day, people visit cemeteries to make offerings to the departed ancestors. Many Theravadins from Cambodia, Laos and Thailand also observe this festival.

Ulambana is also a Japanese Buddhist festival known as Obon, beginning on the thirteenth of July and lasting for three days, which celebrates the reunion of family ancestors with the living.

• Avalokitesvara’s (Kuan Yin) Birthday
This is a festival which celebrates the Bodhisattva ideal represented by Avalokitesvara. Who represents the perfection of compassion in the Mahayana traditions of Tibet and China. It occurs on the full moon day in March.