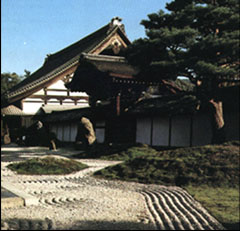 Japan from Korea in the 6th century AD - about 1,000 years after the death of the Buddha. Confucian ideas from Han China had been current in the Japanese court since the 5th century AD. By the time Buddhism took root in Japan, an often mutually tolerant presence of three systems - Shinto, Buddhism and Confucianism - existed.

Temple and sand gardenThe Chinese and Korean missionaries who introduced Buddhism brought with them rituals and texts from both the Theravadin and Mahayana schools which had been most successful in China. Of particular influence in Japan were three texts: the Lotus Sutra, the Sutra of Golden Light and the Benevolent Kings Sutra. These were sometimes called the Three Scriptures Protecting the State. And in this respect it has often been said that the aim of the government's support for Buddhism was less to achieve the salvation of the people than to make use of religion as an instrument of power and imperial consolidation.

"Zen" is Japanese for Cha'n which itself derives from the Sanskrit dhyana (meditation). Two main schools of Cha'n Buddhism thrived in Sung dynasty China, both emphasizing meditation and a non-ritualistic direct form of contemplation. Eliminating traditional Buddhist learning, Cha'n aimed at pointing to the mind and perceiving one's true nature. At the basis of Cha'n and Zen philosophy is the Mahayana theory of universal Buddhahood. "Mind and one's true nature" are expressions of the idea that all beings are Buddhas, and that "Buddha mind" is the shared medium on which people live. It is considered the most direct way to enlightenment.

Sand and moss gardens like this one in a monastery have been made in Japan to express the tranquil spirit of Zen. The meaning of the gardens lies in their simplicity. Zen monks (see below) in zazen. Like the first patriarch, Bodhidharma, they sit with lowered eyes before a blank wall. Dogen, founder of the Soto school of Zen wrote detailed instructions for Zen practitioners. Some of these, such as the prohibition against fault-finding in others, are moral, others are in the form of simple rules. Perhaps most enduring are Dogen's guidelines for meditation: 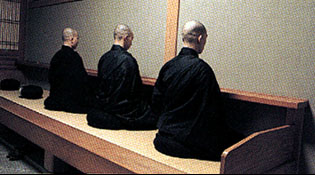 Meditation should be practiced in a quiet room, in the lotus posture, with open eyes. loose clothing, an upright back and the breath regulated quietly. Then Dogen instructs, "Thinking of non-thinking ... by thinking beyond thinking and non-thinking. This is the basis of zanzen."

So Zen is self-reliant and does not advise living by anything other than a person's own authority. There is a verse which describes Zen clearly:

A special understanding outside the scriptures,
No dependence on words and letters,
Direct pointing to the heart of man,
Seeing into one's own nature.

A Zen master, who is teacher and guide, is not the supreme authority and even the Buddha is not. "If you come across the Buddha in your path, kill him," a Zen Master said. He meant that no idea about the Buddha, however wonderful and wise, should come between a person and his own direct experience of truth. This makes Zen Buddhism a deeply spiritual path. It also tells people how to go about living in the world:

When walking just walk.
When Sitting just sit,
Above all, don't wobble!

A Zen master's writing would show the standard of his insight. Space is seen as the basis of all Zen art - objects exist in space, words come out of the air, the feeling of satori is that of infinite space.

This 17th century Japanese brush and ink handwriting, with its relaxed Zen spontaneity, is one of the exercises practiced by Zen monks.